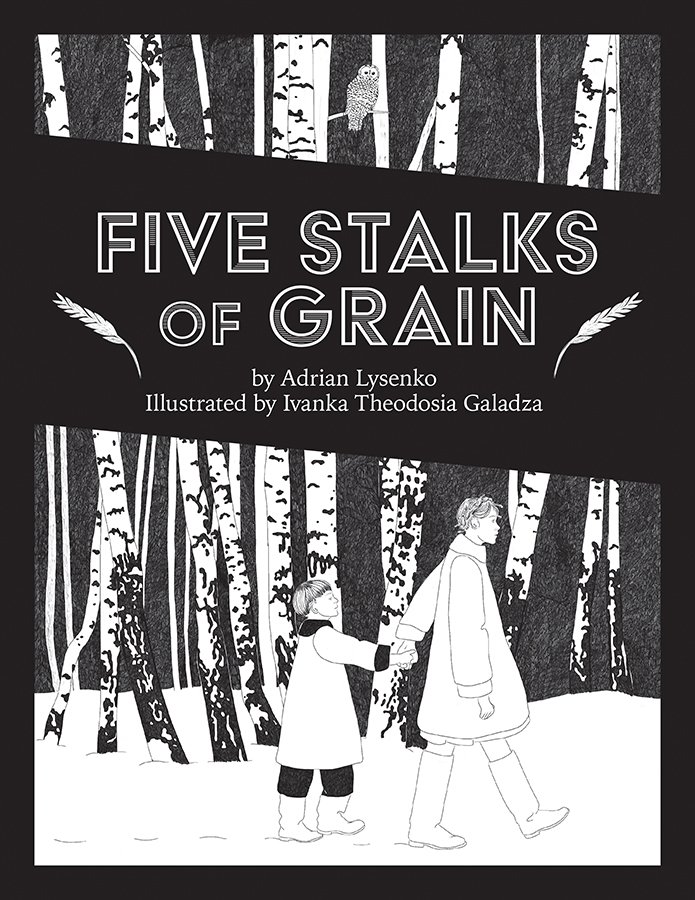 A powerful and haunting graphic novel that tells a story of tragedy and survival during the Holodomor, the terror-famine that claimed millions of lives in Soviet Ukraine.

In 1932, as famine rages across Ukraine, the Soviet government calls for the harshest punishment for those who keep for themselves even five stalks of grain. When their mother is accused of hoarding and summarily killed, Nadia and Taras must leave their home on a desperate quest for survival.

Attempting to navigate a closed country, to stay together, and to stay alive, Nadia and Taras must face secret police, soldiers, and fellow citizens forced to abandon charity and sometimes even humanity in the face of impossible hunger. Unsure who to trust and unable to find refuge, they search for somewhere, anywhere, where they can be safe.

Historical fiction at its finest, Five Stalks of Grain is powerfully written and beautifully illustrated, drawing on Ukrainian artistic traditions to tell a story of loss, grief, and hardship with delicate strength. It is a record of a time of profound suffering and a reckoning with the human cost of a tragedy shaped by politics and policy.

Adrian Lysenko is a writer, editor, and journalist who has worked in Ontario, Alaska, the Northwest Territories, and Nunavut. He is the winner of the Taras Shevchenko Emerging Writer’s Competition and editor of the arts and culture alternative The Walleye Magazine. Adrian lives outside Thunder Bay, Ontario.

Ivanka Theodosia Galadza is a Ukrainian-Canadian illustrator. She holds a BFA in printmaking at Concordia University. Ivanka lives in Ottawa, Ontario.

Praise for Five Stalks of Grain

Conveys the trauma of the Holodomor with power and humanity. A high-speed page-turner.

Genuine horror and anguish undergird this poignant evocation of atrocity.

Five Stalks of Grain is a stark gut-punch of a graphic novel.

Five Stalks of Grain is an outstanding and thought-provoking graphic novel that will appeal to various types of readers: adults, young adults, teenagers, and even pre-teens. Despite using few words, Lysenko’s prose is beautifully-crafted and complex, and its characters are well-rounded. The textual narrative is complemented by Galadza’s black and white illustrations, which depict the Holodomor—the Great Famine of 1932-1933—in Soviet Ukraine in a subtle, yet gripping manner. With its multimodal narrative, multidimensional characters, and unusual references to fairy tales and folklore, Five Stalks of Grain is perfect for use in the classroom.

Five Stalks of Grain, a Graphic Novel about the Holodomor, CBC Saskatchewan Weekend

Graphic Novel Five Stalks of Grain Conveys the Trauma of the Holodomor with Power and Humanity, Toronto Star

Have you Heard of the Holodomor? CBC News