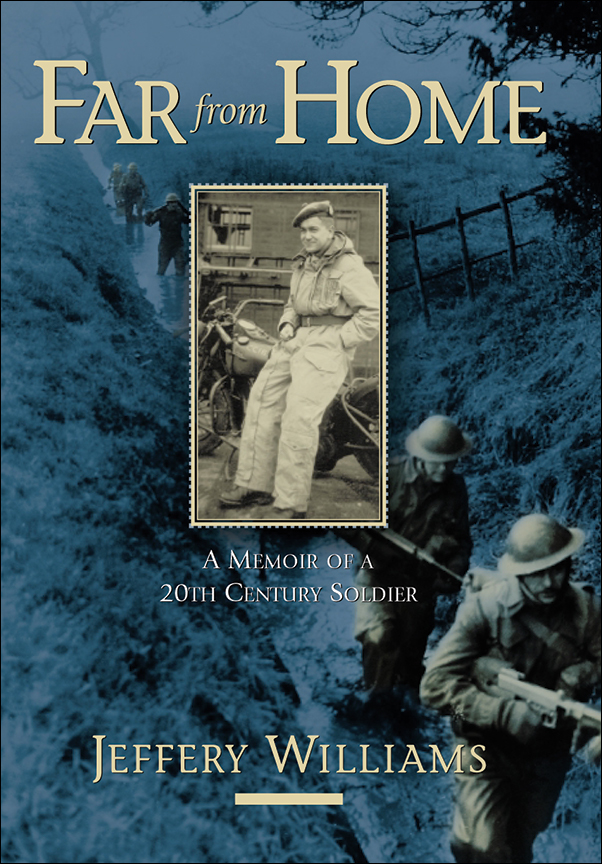 Far From Home: A Memoir of a Twentieth-Century Soldier

Far From Home recounts the life of a soldier who grew up in 1920s Calgary, became an officer in the Canadian army, and travelled the world.

Jeffery Williams offers a vivid retelling of his childhood in Calgary during the depression, followed by the outbreak of war and his enthusiastic enrolment in the Canadian Army. First sent to England in 1939, eager and untrained, Williams went on to a thirty-three year career, experiencing wars in Europe and Korea, and serving inCanada, Germany, the United States, and England.

With an uncanny memory, William recounts his fascinating history with remarkable people both famous and unknown, including the Royal Family, John, and Dwight D. Eisenhower. Jeffery Williams’ transition from "the most untrained officer in the army" to a man equally at home on the field or in the houses of government, and the bumps and shocks of growing from a simple upbringing to the sophisticated life of an international officer is told with great humour and rare interest. Far From Home is a rare insight into the rarely seen human side of military life.

Jeffery Williams is the Governor General’s Literary Award winner of the 1983 Non-Fiction Award for his biography of Field Marshal the Viscount Byng of Vimy. Committed to the interests of veterans, he represented the Royal Canadian Legion on the executive of the British Commonwealth Ex-Services League.

Far From Home was published as a part of Legacies Shared

Praise for Far From Home

An excellent autobiography by a Calgary Highlander staff officer.

Williams presents a rich narrative that offers special views from a Canadian perspective. His ability to see through red tape and confusion, his understanding of the complexity and fog of wartime preparations, and his insights into the human side of life make for a significant contrition to the field of military studies and memoir writing. Williams’ study will occupy a special niche for works of this type.

This memoir represents the experience of an international Canadian from the 1920s until 1970, mainly as an army officer, but with considerable contact with the civilian world. It makes a significant contribution because it recounts so many stories involving well–known figures and ordinary citizens over a period of 50 years, and because it covers in a personal way some very significant events in world history, namely World War II, Korea, and the Cold War.