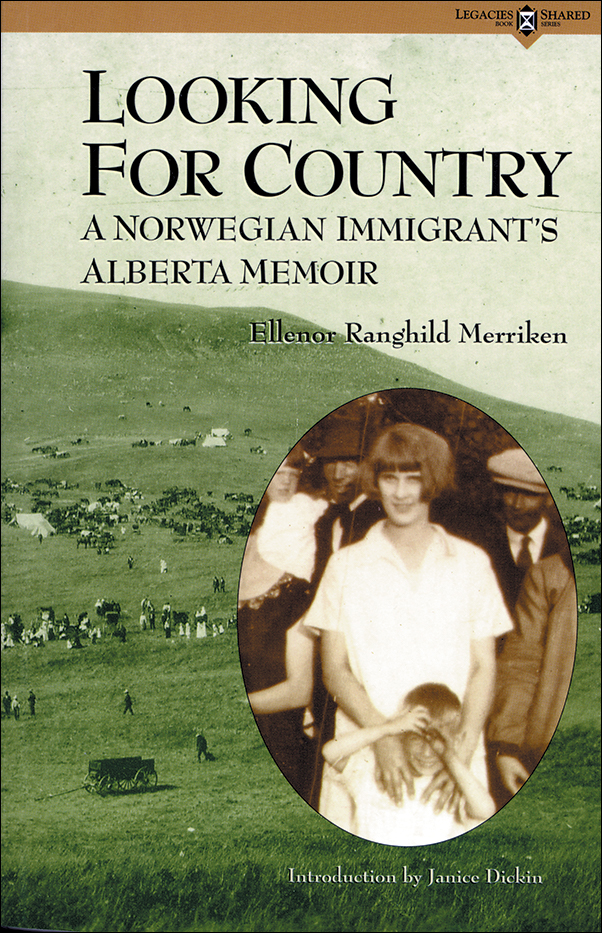 The memoir of Ellenor Ranghild Merriken, a young Norwegian immigrant to Prairie Alberta who, though unprepared for the challenges of a new country, nonetheless grew to take great pride in her years spent there.

“Looking for Country” refers to the thought process of animals bent on escape. A stampeding herd, or a spooked horse running away with its rider, may be described as “looking for country.” It can also be applied in another sense — immigrants were looking for land, a piece of new country, and, perhaps, an escape from their old country.

This memoir documents the experiences of a young woman growing up as a pioneer in Alberta. Although, for many people, immigration brought great sadness, Ellenor Merriken loved Alberta and took tremendous pride in the years spent there. She did not deny the struggles, as shown in her writing, but was amply rewarded by “the satisfaction of knowing that I have had a part in the making of a great country.”

Ellenor Ranghild Merriken was the youngest daughter of the Olsen family. Immigrants from Norway, they were new to the prairies of east-central Alberta and unprepared for the challenges that faced them in their new country.

Looking for Country was published as a part of Legacies Shared

Praise for Looking for Country

Readers interested in the history of women, Norwegian immigration, and western settlement, as well as those interested in women’s writing more generally, will welcome this attractive volume… The memoir itself is a delight to read.