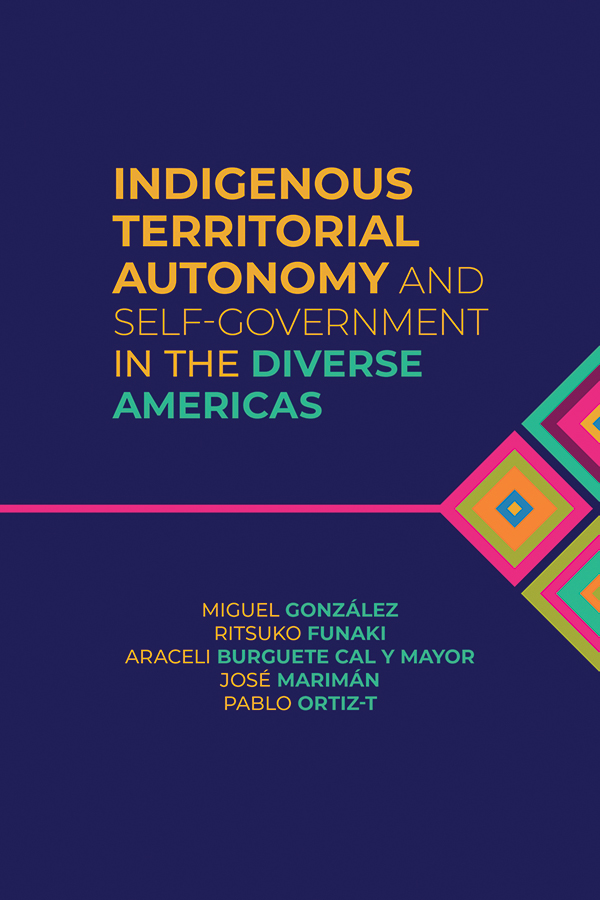 Indigenous Territorial Autonomy and Self-Government in the Diverse Americas

An essential work on autonomy and self-governance for scholars of Indigenous politics, Indigenous rights in the Americas, constitutional law, and multicultural citizenship regimes.

Across the Americas, Indigenous and Afro-descendent peoples have demanded autonomy, self-determination, and self-governance. By exerting their collective rights, they have engaged with domestic and international standards on the rights of Indigenous Peoples, implemented full-fledged mechanisms for autonomous governance, and promoted political and constitutional reform aimed at expanding understandings of multicultural citizenship and the plurinational state. Yet these achievements come in conflict with national governments’ adoption of neoliberal economic and neo-extractive policies which advance their interests over those of Indigenous communities.

Available for the first time in English, Indigenous Territorial Autonomy and Self-Government in the Diverse Americas explores current and historical struggles for autonomy within ancestral territories, experiences of self-governance in operation, and presents an overview of achievements, challenges, and threats across three decades. Case studies across Bolivia, Chile, Nicaragua, Peru, Colombia, Mexico, Panama, Ecuador, and Canada provide a detailed discussion of autonomy and self-governance in development and in practice.

Paying special attention to the role of Indigenous peoples’ organizations and activism in pursuing sociopolitical transformation, securing rights, and confronting multiple dynamics of dispossession, this book engages with current debates on Indigenous politics, relationships with national governments and economies, and the multicultural and plurinational state. This book will spark critical reflection on political experience and further exploration of the possibilities of the self-determination of peoples through territorial autonomies.

Miguel González is an anthropologist and political scientist. He is the author of Pluriethnic Governments: The Confirmation of Autonomous Regions in the Atlantic Coast-Caribbean of Nicaragua and Autonomy to Debate: Policies of Indigenous Recognition and the Plurinational State in Latin America. His research is focused on development issues related to Indigeneity and Indigenous peoples in contemporary Latin America.

Ritsuko Funaki is a professor at Chuo University, Japan. She has served as an assistant to the Japan International Cooperation Agency in Argentina, held a JICA assignment in the municipality of El Torno, Santa Cruz, Bolivia, and served as a visiting research fellow at the Centre for Research on Latin America and the Caribbean, York University. Her research relates to Indigenous autonomy, decentralization, and political participation.

Araceli Burguete Caly Mayor is professor-researcher at CIESAS-Southeast based in San Cristobal de Las Casas, Chiapas. She is the editor of Mexico: Experiences of Indigenous Autonomy and co-editor of Indigenous Justice: Rights of Consultation, Autonomies, and Resistance. She works consistently on themes of autonomy.

A significant contribution to contemporary discussions on Indigenous peoples and the state, for its critical and comprehensive view, and especially for the diversity of experiences that it documents that put at the center the strength of peoples to exercise their right to self-government in contexts of great diversity and dispossession.

This book will probably close an era of experiences, analysis and discussions on autonomies and self-governments in Latin America. But it will open another. The texts show the tensions and contradictions of these forms of social existence with the nation-state, the political form of capitalism, which for centuries was the main arena for capitalist expansion but proved to be an obstacle for neoliberal globalization, which has been dismantling it. It is time to conceive and test other political horizons, as is beginning to be outlined here. They are both paths of emancipation and openings to a new world, of radical breath. It is not irrelevant that they are traced above all by women.