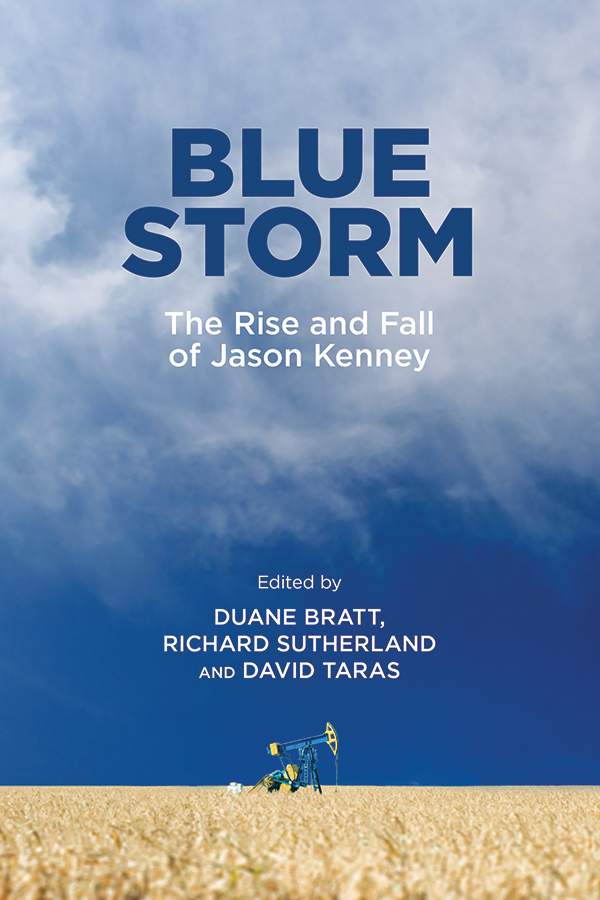 Blue Storm: The Rise and Fall of Jason Kenney

The first scholarly analysis of the 2019 Alberta Election, which led to the victory of Jason Kenney’s United Conservative Party, and of the UCP’s first years in government.

In 2019, the United Conservative Party, under the leadership of Jason Kenney, unseated the New Democratic Party to form the provincial government of Alberta. A restoration of conservative power in a province that had seen the Progressive Conservatives win every election from 1971-2015, UCP quickly began to make political waves.

This is the first scholarly analysis of the 2019 election and the first years of the UCP government, with special focus on the path of Jason Kenney’s rise to, and fall from, provincial political power. It opens with an examination of the election from a number of vantage points, including the campaign, polling, and online politics. It provides fascinating insight into internal UCP politics with chapters on the divisions within the party, gender and the UCP, and the symbolism of Kenney’s famous blue pickup truck. Explorations of oil and gas policy, the Energy War Room, Alberta’s budgets, health care, education, the public sector, Alberta’s cultural industries, and more provide unprecedented insight into the actions, motivations, and impacts of Kenney’s UCP Government in power. Contributions from top political watchers, journalists, and academics provide a wide range of methods and perspectives.

Concluding with a survey of the impacts of COVID-19 in Alberta and a comparison between Jason Kenney and Doug Ford, Blue Storm is essential reading for everyone interested in Alberta politics and the tumultuous first years of the UCP government. Providing key insights from perspectives across the political spectrum, this book is a captivating deep-dive into an unprecedented party, its often controversial politics, and its unforgettable leader.

Duane Bratt is a political science professor in the Department of Economics, Justice, and Policy Studies at Mount Royal University. He is the co-editor of Orange Chinook: Politics in the New Alberta and author of Canada, The Provinces, and the Global Nuclear Revival. Duane is a regular commentator on political events.

David Taras was professor in Communication Studies and Ralph Klein chair in Media Studies at Mount Royal University. He was co-editor of Orange Chinook: Politics in the New Alberta. Through a distinguished career, David was a respected scholar, public intellectual, and generous mentor. This book is dedicated to his memory.