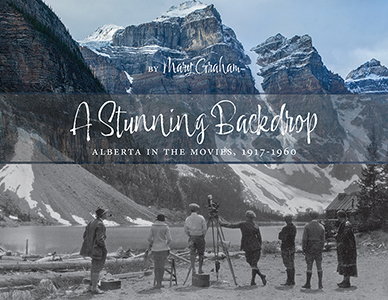 The unconventional, untold story of Alberta’s film history, defined by the terrible beauty of its pristine landscape, surprisingly important to Hollywood, and recaptured in lost or ignored Indigenous perspectives and stories.

Alberta’s magnificent landscape has served as a popular location for filmmakers since the dawn of the movie industry. For film pioneers, Alberta embodied the myth of the Great Northwest, a primeval mountain wilderness and the last western frontier. In turn, Canadian entrepreneurs were eager for American studios to drape Alberta landscape across the backdrop of their movies, an advertisement without equal.

A Stunning Backdrop is the untold story of six rollicking decades of filmmaking in Alberta. Mary Graham draws on twelve years of exhaustive research to reveal a film history like no other, illuminating the deep importance of the province to Hollywood. She explores the often friendly partnerships between American filmmakers and Indigenous communities, particularly the Stoney Nakoda, that provided economic opportunities and, in many cases, allowed them to retain religious and cultural practices banned by the Canadian government.

Beautifully illustrated with archival photography and featuring century-old set stills alongside photographs of the locations as they appear today, by Jean Becq, Solomon Chiniquay, Jeff Wallace, George Webber, and Paul Zizka, A Stunning Backdrop is the fascinating, often surprising, always unconventional story of film in a province whose rugged, compelling, multifarious, terribly beautiful landscape continues to inspire filmmakers and audiences around the world.

Mary Graham is a writer, documentary journalist, and film historian. She has appeared as a feature film specialist at CBC Radio and ARTE, the European Culture Channel. She presents frequently about her ongoing work on the importance of Indigenous contributions to Alberta film history in the media, and at universities, museums, and other public venues.