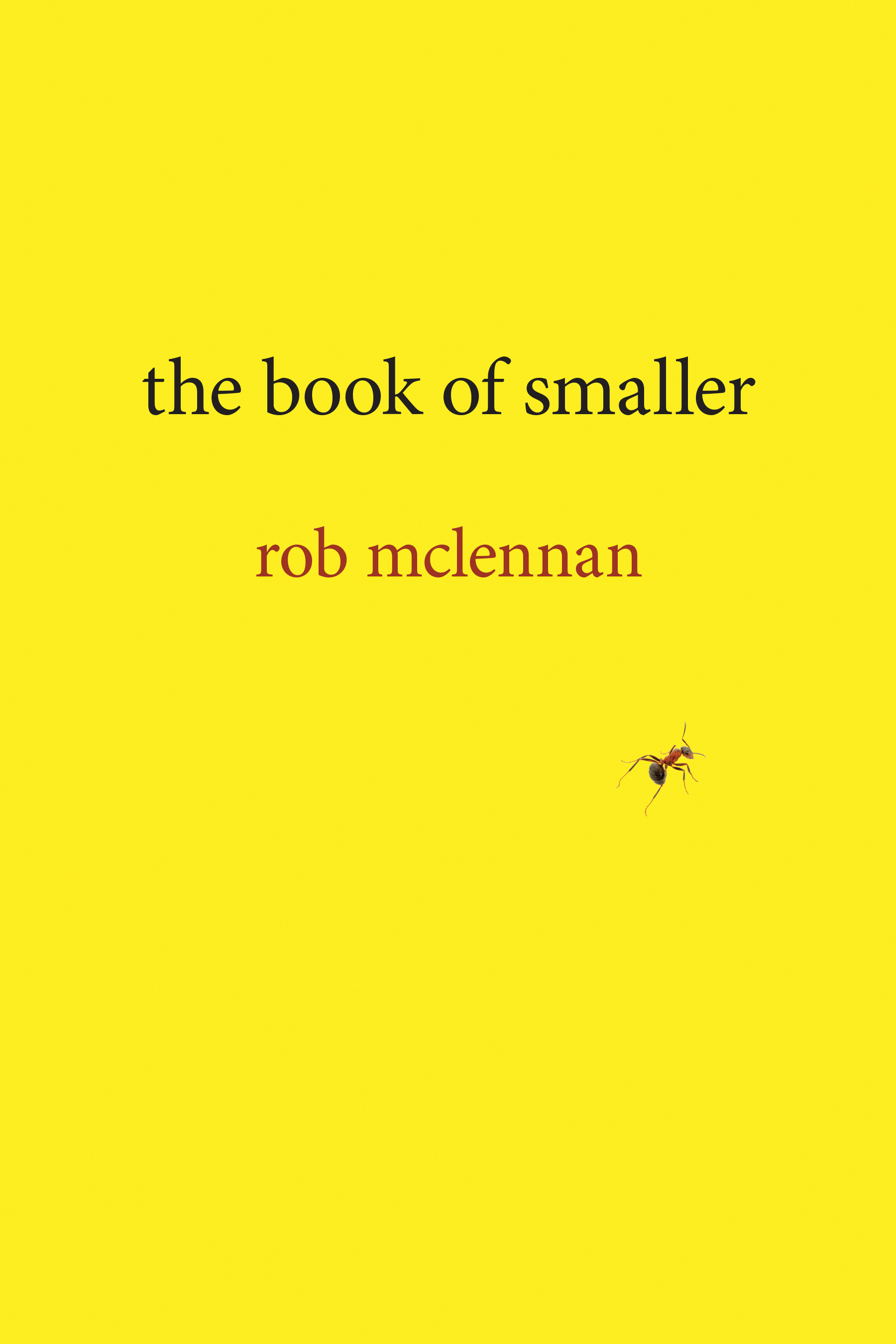 the book of smaller

rob mclennan presents a collection of sharp, challenging prose poetry that asks what can be achieved if we try a little smaller.

Written while at home full-time with two small children under five, the book of smaller is a collection of short, sharp, incredibly dense prose poems. Created in moments snatched from chaos, these poems challenge the possibilities of language in very small spaces.

Each poem is a still moment, a memory, a burst of observation, suspended outside time and held up to the light as the world whirls around it. Some are intimate, some are public, all are grounded personal, domestic space. With trademark intelligence and daring, rob mclennan uses radical structures to express the concision and disorientation, jumps in sense and mood, the collapse of time and duration, the shattering joy and powerful fears, of full-person, full-time parenthood.

With an unparalleled knowledge of modern poetry and poetic evolution, mclennan breaks the sentence into its most vital pieces, then breaks it further, smashes punctuation out of the expected into spaces of risk and uncertainty, pushing conventions to the edge and then beyond to challenge what writing is, and what a reader can be.

rob mclennan lives in Ottawa, where he is home full-time with two wee girls. He is the author of more than thirty books of poetry, fiction, and non-fiction. He is the winner of the John Newlove Poetry Award, the Ottawa Council for the Arts Mid-Career award, and was inducted into the VERSe Ottawa Hall of Honour in 2014.

Praise for the book of smaller

mclennan excels at distilling sentiment into something, if not more pure, at least more extraordinary. In their minimalism, each line of mclennan’s short poems offers syntactic revolution . . . So much scope, in so little space. This is the triumph of mclennan’s collection. His ability to compress meaning makes his lines pop, makes his poems as addictive as bubble wrap.

[mclennan’s] poems are alive with the family’s quotidian, private homelife and the way domestic duties feed or interrupt the writer’s work.

rob mclennan’s accomplished, agile poems build rooms for tenderness, humility, and awe to accumulate. The illuminated paragraphs that make up the book of smaller collect into an intimate and animated series of atmospheres, infused with an awareness that “We are never at rest.” Here, we are invited to see feelingly as a self dissolves, rebuilds, and atomizes again and again, always in relation, always aware of how we hold and are held by one another’s utterances. Each diastolic pulse grounds itself in sound, then hovers momentarily in the space that emptiness articulates. As mclennan writes: “All my years hold their breath.” My breath has become bound to the rhythms of this book, and the grace of its iterations.

In the book of smaller, rob mclennan continues his sprawling, lifelong commitment to the everyday. In these poems, mclennan braids together the details of his domestic life with a measured attention to the form of the sentence. We meet his kids and his kitchen, his traffic and his drift. Syntax, weather. These looping, cyclical prose poems pool up paratactically. They piece slight movements into panoramas. They count the moments of the day to bleed them together. They wait, rumble. In this small book, mclennan lives.

The rhythms of domesticity underlie the book’s music, and the author wrestles with how to write in the midst of caring for young children while wanting also to live fully in the larger world. Unabashedly, the book confesses to what is true for every real writer—“I don’t know how to write”—and so succeeds as a poignant record of “A human, being.”