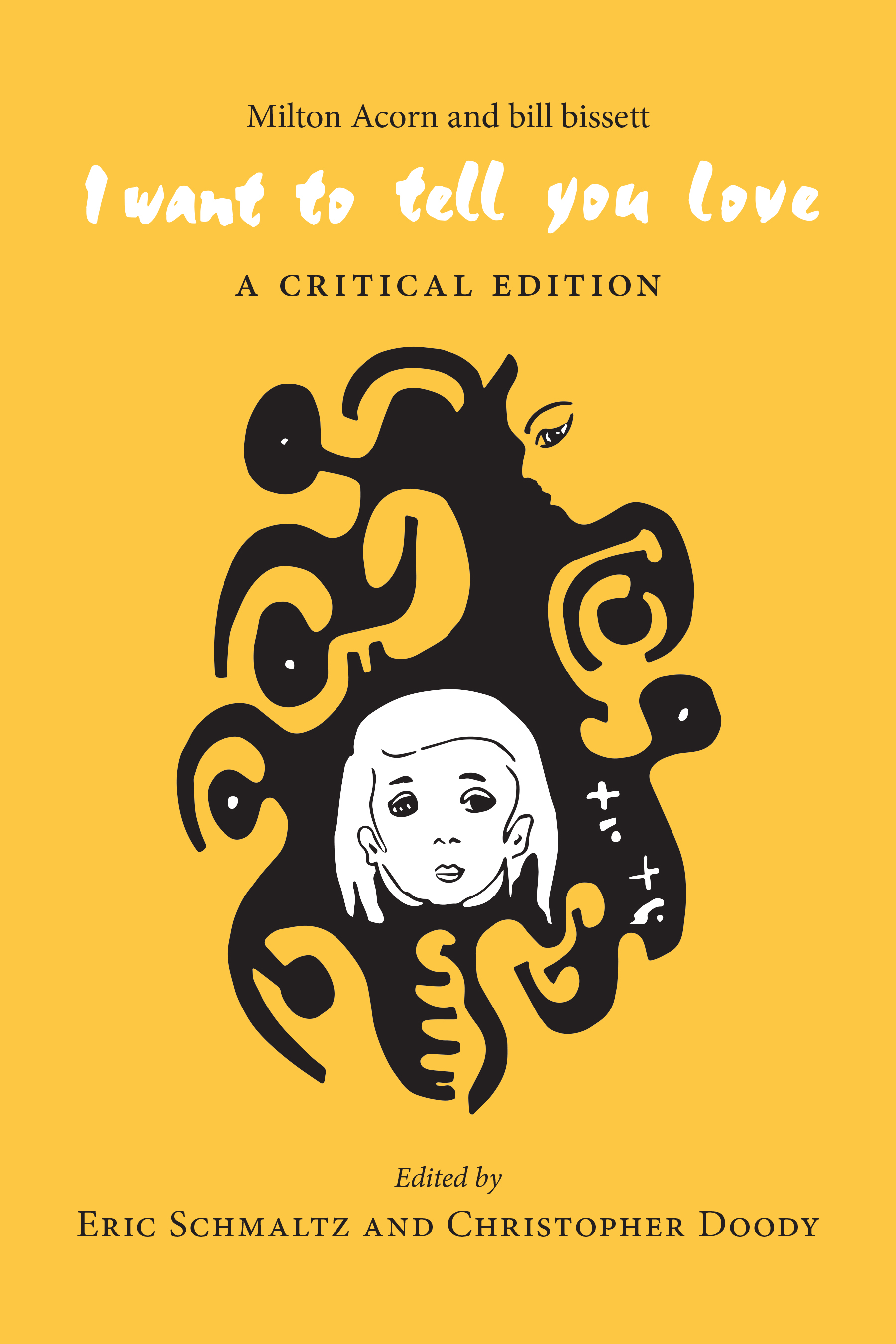 I Want to Tell You Love: A Critical Edition

Published in its intended form for the first time, I Want to Tell You Love is a remarkable collaboration from bill bissett and Milton Acorn that captures the spirit of the sixties.

bill bissett and Milton Acorn are two of Canada’s most significant, and most controversial, literary figures. In the 1960s, bissett’s renown as an experimental poet was growing as his social and political concerns were stirred by the voice of the counterculture. Acorn, inspired by socialist theory and imagism, was building his reputation as a poet on the margin who ran against the grain of the literary establishment. Both were rising towards cultural prominence—one, a true beatnik and the other, a certifiably rugged lyric poet. In 1965 they came together in a remarkable collaboration, a challenge to the established literary tradition and a call for a better world.

Published for the very first time, I Want to Tell You Love is the combination of bissett and Acorn’s seemingly incongruous poetics to confront the turbulent and swiftly changing world of the 1960s. A collection of poems and illustrations, it is a window into the lives and motivations of two soon-to-be-canonized cultural figures. I Want to Tell You Love is a work of friendship, a shared vision of resistance, and a mutual longing for a better world.

This critical edition offers the manuscript in its intended form alongside contextualizing scholarship in a significant contribution to literary history. I Want to Tell You Love offers an opportunity to reevaluate the nature and scope of Canadian poetry during a critical time of national cultural awakening.

Milton Acorn is one of the most recognizable poets of the mid-to-late twentieth century in Canada. During his lifetime, Acorn published numerous poetry books that are distinguished by his skillful ability to fold together the personal and political, including I’ve Tasted My Blood, for which he won the Canadian Poet’s Award in 1970 and The Island Means Minago, for which he won the Governor General’s Award for Poetry in 1975.

Eric Schmaltz is a scholar, poet, editor, and educator. His research has focused on experimental and avant-garde Canadian literatures. He is the author of Surfaces.

Christopher Doody is a scholar whose work has focused on book history and mid-twentieth century authorship in Canada. With Suzanne Bailey, he is the co-editor of the revised edition of P.K. Page’s Brazilian Journal.

Praise for I Want to Tell You Love

You won’t find a better snapshot of a turbulent time, or a more carefully assembled and realized context, or a more thorough interrogation of this meeting of minds than this wonderful collection. Eric Schmaltz and Christopher Doody have successfully reanimated a moment when the radical and aesthetic avant-gardes aligned for a brief moment in Vancouver, too brief for the Canadian publishing industry to catch exactly what had happened and what had been lost. I Want to Tell You Love is proof positive that “xcelens can happn” across and perhaps because of our differences

—Gregory Betts, author of Finding Nothing: Avant-Garde Writing in Vancouver, 1959-1975

—Trevor Carolan, author of author of The Literary Storefront: The Glory Years 1978-1985