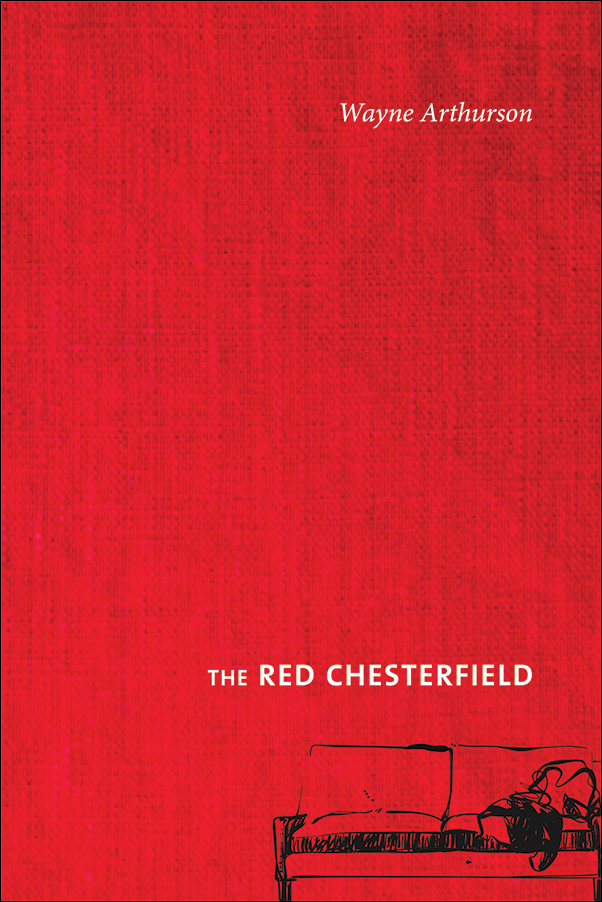 Gangsters. Yard sales. Politics. A severed foot. Family. How far is one person willing to go to issue a bylaw ticket?

M is a bylaw officer, living with two brothers, in their parents’ old house. While investigating a suspicious yard sale, M discovers a red chesterfield sitting in a ditch. Looking closer, M finds a running shoe—and a severed foot.

Now M is involved in a murder investigation. Meanwhile, older brother K’s work for a new political party begins to seem suspicious, while younger brother J navigates the complicated world of young-adulthood, and boss Rhonda demands more and more attention, M must navigate a world of Russian gangsters and neglected wives, biker gangs and suspicious coincidences. On top of everything else, M is determined to track down the owner of that red chesterfield and make sure they get a ticket.

The Red Chesterfield is a delightful, unusual novella that upends the tropes and traditions of crime fiction while asking how far one person is willing to go to solve a crime, be it murder or the abandonment of a piece of furniture.

We’re proud to partner with the National Network for Equitable Library Service Braille Publication Project to offer The Red Chesterfield in braille transcription, available at a library near you. If you are interested in purchacing a braille copy of this book, please contact the NNELS.

Wayne Arthurson is a writer of Cree and French Canadian descent. He is the author of five novels, including Fall From Grace, winner of the Alberta Reader’s Choice Award, and Traitors of Camp 113, a finalist for the High Plains Book Award for Best Indigenous Novel.

Praise for The Red Chesterfield:

A sharp deconstruction of the conventions of the mystery genre . . . There are no neat conclusions at the end of The Red Chesterfield, but there is plenty for readers to uncover as they investigate the various references and meanings embedded within this short but intriguing book.

Arthurson has more than pushed the envelope of mainstream mystery narratives, while taking aim at the stereotypical portrayals of Indigenous people that so pervade the genre.

Thoughtful, surprising, down-to-earth, and secrative. In a wonderfully suspenseful unravelling, the reader is led through a neighbourhood trail of mysteries, small infractions and citizen complaints. Briefly and deftly told, The Red Chesterfield resembles the piece of furniture a little itself: it’s roomy but not excessive, fashionable, a bit quirky, and formal yet expressive. In short, it has panache.

—Shawna Lemay, author of Rumi and the Red Handbag

A gently macabre and wildly hilarious novel about making your peace with life in a landscape that refuses to make sense. It combines the quick-fire zaniness of Elmore Leonard with the quiet humanity of Amy Hempel. Delightful, rich, and one-of-a-kind.

—Sandra Newman, author of The Heavens

—Sam Wiebe, author of Cut You Down, Invisible Dead and Last of the Independents

The mark of any great story is when the reader never wants it to end. Wayne Arthurson’s The Red Chesterfield pulled me into an alluring world of magic and mystery, a slow tease of crisp, compelling writing. A ten!

The Red Chesterfield in the Media:

14 Canadian Mysteries and Thrillers to Check Out This Summer, CBC Books

Wayne Arthurson Plays with the Mystery Genre and Magic, The Next Chapter, CBC Radio

The Red Chesterfield is an Edmonton Bestseller!

The Buzz: 5 New Books with Great Reviews on 49th Shelf

34 Works of Canadian Fiction to Watch For in Fall 2019, CBC Books

The Importance of Perspective in Literature: Wayne Arthurson on the Ryan Jespersen Show, 630 CHED