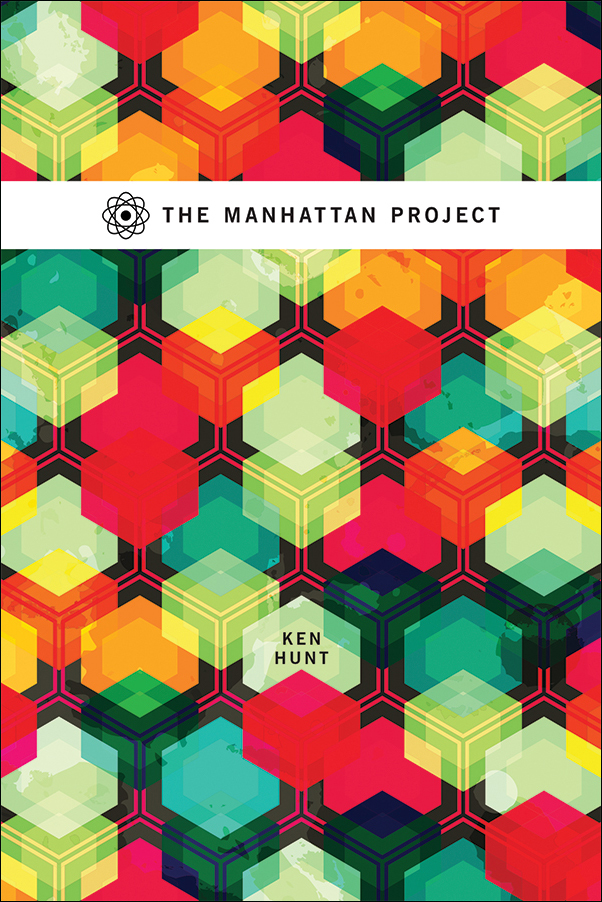 Necropastoral poetry that traces the path of nuclear discovery from the Pleistocene to the Anthropocene.

The hands of humans split the atom and reshaped the world. Gradually revealing a sublime nightmare that begins with spontaneous nuclear fission in the protozoic and ends with the omnicide of the human race, The Manhattan Project traces the military, cultural, and scientific history of the development of nuclear weapons and nuclear power through searing lyric, procedural, and visual poetry.

Ken Hunt’s poetry considers contemporary life—life in the nuclear age—broadly and deeply. It dances through the liminal zones between routine and disaster, between life and death, between creation and destruction. From the mundane to the extraordinary, Hunt’s poems expose the depth to which the nuclear has impacted every aspect of the everyday, and question humanity’s ability to avoid our destruction.

Challenging the complicity of the scientists who created devastating weapons, exploring the espionage of the nuclear arms race, and exposing the role of human error in nuclear disaster, The Manhattan Project is a necropastoral exploration of the literal and figurative fallout of the nuclear age. These poems wail like a meltdown siren, condemning anthropocentric thinking for its self-destructive arrogance.

Ken Hunt is the author of The Lost Cosmonauts and Space Administration. His writing has appeared in Chromium Dioxide, No Press, and Freefall. He has served as the managing editor of NōD Magazine and filling Station, and is the founder of Spacecraft Press.

Praise for The Manhattan Project:

Hunt stares straight into a darknes fueled by science . . . There is something incredibly bold about looking such darkness straight in the eye, even with the distance of decades, and a darkness that isn’t as far removed from the presence as one might imagine.

The Manhattan Project combines a rigerous style with a dark, serpintine subject

The Manhattan Project finds inspiration in the “heavy metal” music of uranium, keeping time to the beat of atomic clocks, whose alarms go off on Doomsday. Read this book, and feel your excitement grow, like a geiger counter that panics in the presence of plutonium. As with all the books by Ken Hunt, I wish that I might have written this book as well.

These poems glow. Delve into the secret half-lives of atoms and watch the poetic line mutate into explosive subclauses, where buried in the apocalyptic imagination of human strife is a necropastoral reverie, an offering of some kind of solace in the spire of the horror of nuclear holocaust. These poems are to doomsday machines what antimatter is to the Anthropocene, a glimpse of the scale of the horror of total erasure of what matters (what matter has done), a reeling monody of our dogged, fantastical pursuit of annihilation.

Ken Hunt’s The Manhattan Project explores the inevitable heartbreak of the swerve of atoms; how each movement, each decision, tumbles the locks of catastrophe. The dirge of our mutual-assured-destruction is sung as a hymn, staring into the fused-sand glass in the Los Alamos desert.

Sophisticated, molecularly inventive poetry. Reading The Manhattan Project is an act of fission—its various component parts split into recurring syntactic patterns and smaller, dispersed inflections. In both form and subject, this is a harrowing and moving reckoning with the necropastoral consequences of the nuclear age.

The Manhattan Project in the Media: