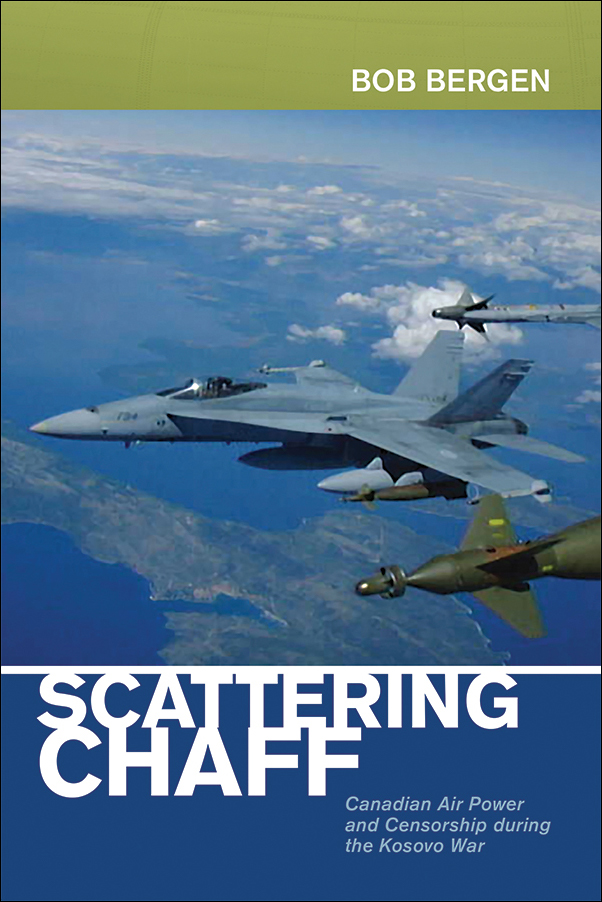 Most Canadians know little, if anything at all, about the role of the Canadian Air Force in the 1999 Kosovo Air War. Yet lives were at put at stake as mission dedication and military skill were pushed to the limit.

Some of Canada’s most prominent journalists attempted to report on the war, but came away virtually empty handed. Daily briefings given at the National Defence Headquarters provided so little information most Ottawa journalists simply stopped going. The decision of the military to choke Canada’s news media was deliberate and based on a tactical and strategic rationale.

Scattering Chaff explores the role of the Canadian Air Force in the bombing campaigns of the Kosovo Air War while examining the military’s interference with the news media attempting to report to the Canadian public. It explores the ways in which the military has come to manage the media as an element of operational security, mission focus, and of popular opinion.

Drawing on in-depth interviews with the war’s Canadian participants and a treasure-trove of unpublished documents and photographs, this book is an unprecedented investigation of a little-known conflict and the forces that prevented it from being better known.

Bob Bergen is an adjunct assistant professor at the Centre for Military, Security and Strategic Studies at the University of Calgary. He was a staff journalist at The Albertan from 1976-1980 and the Calgary Herald from 1980-2000. He is the author of Censorship, The Canadian News Media, and Afghanistan.

Scattering Chaff is an informative and enjoyable read which illuminates a largely-overlooked war in which Canadian service members risked their lives, the Canadian Forces manipulated and suppressed the news media, and for which Canadian citizens paid without knowing what they were buying.

Compelling “inside the cockpit” reading . . . [those] who work in—or at least have appreciation for—the broader public affairs dynamics of any given operation will find it particularly interesting.

The opening chapter of Scattering Chaff offers a riveting cockpit view of the sorties Canadian CF-18s flew over Serbia . . . What emerges is a wholly fleshed-out portrait of Canadian fighter-bombers in action. Such descriptions give Bergen’s work a drama and verisimilitude appropriate to the subject. But the compelling narrative is only a vehicle for the book’s two-pronged critique of Canadian military management.

A well-researched and accurate capture of the war we fought. It is the only book of its kind and has significant historical value.

Bob Bergen has written an extraordinary and compelling account of Canada’s participation in the Kosovo Air War. The book is an indispensable guide for anyone interested in what it was like to be in the thick of war, the nature of media coverage and the politics of Canadian involvement. Scattering Chaff is well crafted, deeply researched and a superb read.

Finally, the full story of the Canadian contribution to the Kosovo Air Campaign of 1999. Bergen tells the story of the people involved and the missions. Fascinating stuff that fills a major gap in our understanding of an important Canadian Armed Forces NATO operation.