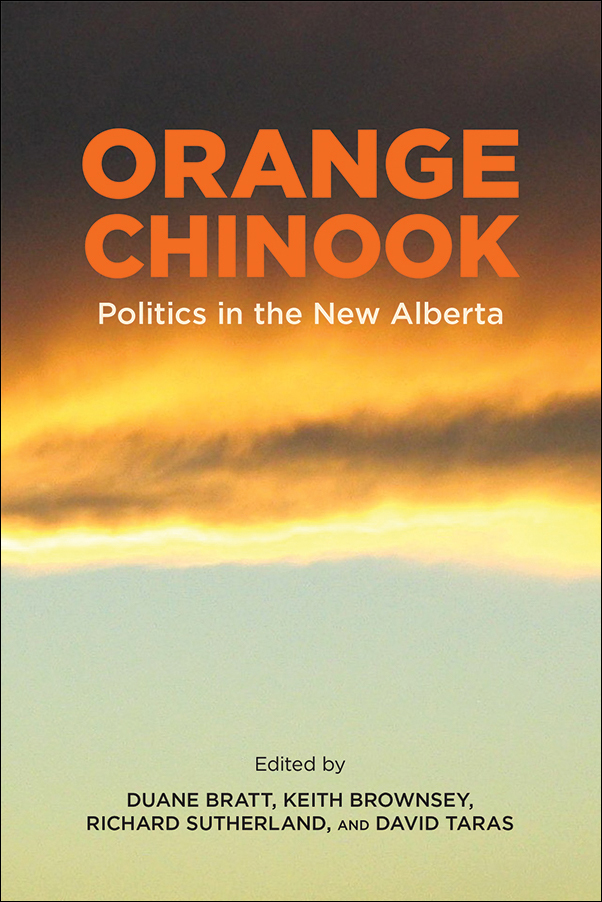 The first scholarly analysis of the unprecedented NDP victory in the 2015 Alberta Provincial Election, paying special attention to the details of party campaigns and economic and social factors unique to Alberta politics.

In 2015, the New Democratic Party won an unprecedented victory in Alberta. Unseating the Progressive Conservatives—who had won every provincial election since 1971 they formed an NDP government for the first time in the history of the province.

Orange Chinook is the first scholarly analysis of this election. It examines the legacy of the Progressive Conservative dynasty, the PC and NDP campaigns, polling, and online politics, providing context and setting the stage for the unprecedented NDP victory. It highlights the importance of Alberta’s energy sector and how it relates to provincial politics with focus on the oil sands, the carbon tax, and pipelines.

Examining the NDP in power, Orange Chinook draws on Indigenous, urban, and rural perspectives to explore the transition process and government finances and politics. It explores the governing style of NDP premier Rachel Notley, paying special attention to her response to the 2016 Fort McMurray wildfire and to the role of women in politics.

Duane Bratt is professor and chair in the Department of Economics, Justice, and Policy Studies at Mount Royal University.

Keith Brownsey is a professor in the Department of Economics, Justice, and Policy Studies at Mount Royal University.

Richard Sutherland is an associate professor in the Department of Economics, Justice, and Policy Studies at Mount Royal University.

A useful baseline for considering the future of Alberta politics.

Orange Chinook in the Media

Can the Past Predict the Future of Alberta Election, CityNews

Orange Chinook: Politics in the New Alberta on Global News

In Alberta, The NDP Has Become the Rachel Party, The Star

How the 2015 Election Changed Alberta Politics, No Matter What Happens in 2019, CBC News

The Election Campaign Kickoff on the Press Gallery Podcast, The Edmonton Journal

If Kinney Wins, Be Ready for a BC—Alberta Trade War, The Tyee

I. Setting the Scene

Introduction: Out of an Orange-Coloured Sky
Richard Sutherland

II. The Tory Fall and the NDP Victory

Politics, Alberta Style The Rise and Fall of the Progressive Conservatives, 1971-2015
David Taras

Death of a Dynasty: The Tories and the 2015 Election
Duane Bratt

Marginally Better: Polling in the 2015 Alberta Election
Janet Brown and John B. Santos

IV: The NDP in Power

After Forty-Four Years: The Alberta New Democrats and the Transition to Government
Keith Brownsey

Beyond the "Lovey-Dovey Talk:" The Orange Chinook and Indigenous Activism
Brad Clark

The End of Exceptionalism: Post-rural Politics in Alberta
Roger Epp

A League of Their Own: Alberta’s Women Party Leaders
Lori Williams

Notley and the Beast: An Analysis of the Crisis Communication of Rachel Notley During the 2016 Wildfire
Chaseten Remillard and Sheridan McVean

What’s Past is Prologue: Ontario 1990 and Alberta 2015
Graham White