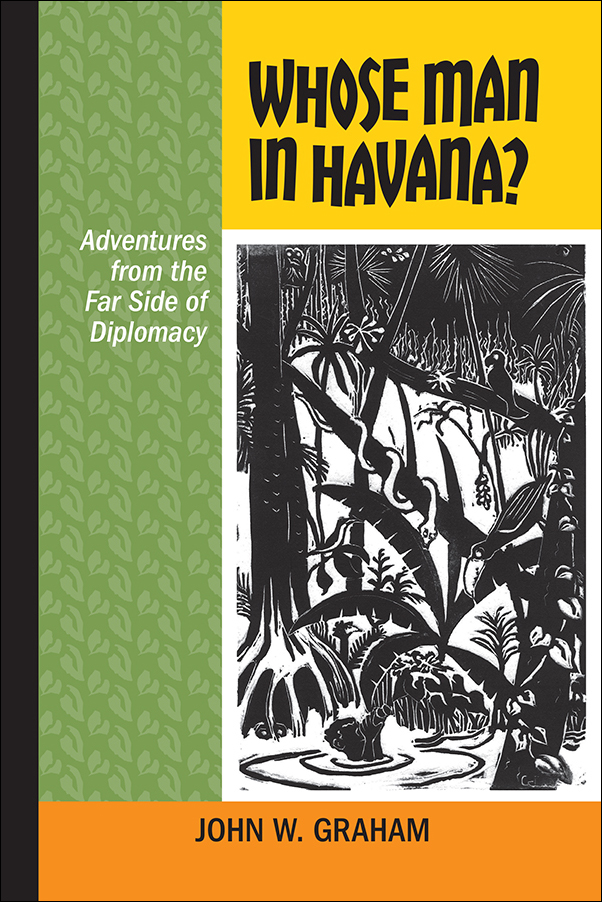 Whose Man in Havana? Adventures from the Far Side of Diplomacy

Splendidly written and murderously funny, John Graham’s rollicking memoir a feast of colourful tales from a long diplomatic career that spanned the word, from work in Cuba spying for the CIA to Bosnia, Kyrgyzstan, Palestine, and Crete.

In Whose Man in Havana? John Graham provides us with a direct look at international relations through his experience as a practitioner who, as he puts it, has been fortunate in his career within the Canadian foreign service and international organizations to be ‘in the right place at the right time’.  The stuff of novels, he never would have dreamed that his apprenticeship would have him stationed in Cuba spying for the CIA on Soviet military operations. Subsequent assignments proved to be as unexpectedly and bizarrely entertaining.

Throughout the book, he has focused on the lighter side of people and places, but almost everywhere the dark side intrudes, particularly the man-made dark side, providing quite a bit of black comedy. He notes that diplomacy at its most effective is neither dry nor humourless. The book is focused mainly on Latin America and the Caribbean, but other chapters range across Bosnia, the UK, Ukraine, Kyrgyzstan, Palestine, and Crete.

John W. Graham is president emeritus of the Canadian Foundation for the Americas (FOCAL) and member of The Friends of the Inter-American Democratic Charter, founded by former US President Jimmy Carter. He was the first director of the Unit for the Promotion of Democracy of the Organization of American States (OAS) and led several missions to Latin American to observe elections. Having participated in the mediation of the OAS in Guatemala, Graham was the chief international mediator in the Dominican post-election crisis in 1994. He has been involved in over thirty electoral observations in the Western Hemisphere, Eastern Europe, the Balkans and Central Asia. In addition, he was High Commissioner to Guyana, Ambassador to Suriname, Minister in London, Director General for the Caribbean and Central American affairs, Ambassador to Venezuela, and non-resident Ambassador to the Dominican Republic.

Praise for Whose Man in Havanna?

At turns lighthearted, irreverent, and deadly serious… Graham’s book is not only a rollicking, entertaining, and worthwhile read, but an elegy for the Silver Age.

A rollicking, engaging memoir—a combination of black humour, wry observations on life in exotic climes and—woven throughout—sophisticated socio-political analyses of places most of us don’t really want to experience in any depth.

Brilliant . . . from one of the foreign service’s best raconteurs.

A rollicking, engaging memoir . . . a feast of colourful tales that don’t quite obscure a serious piece of work on the diplomacy of the period. Writing of the highest order.