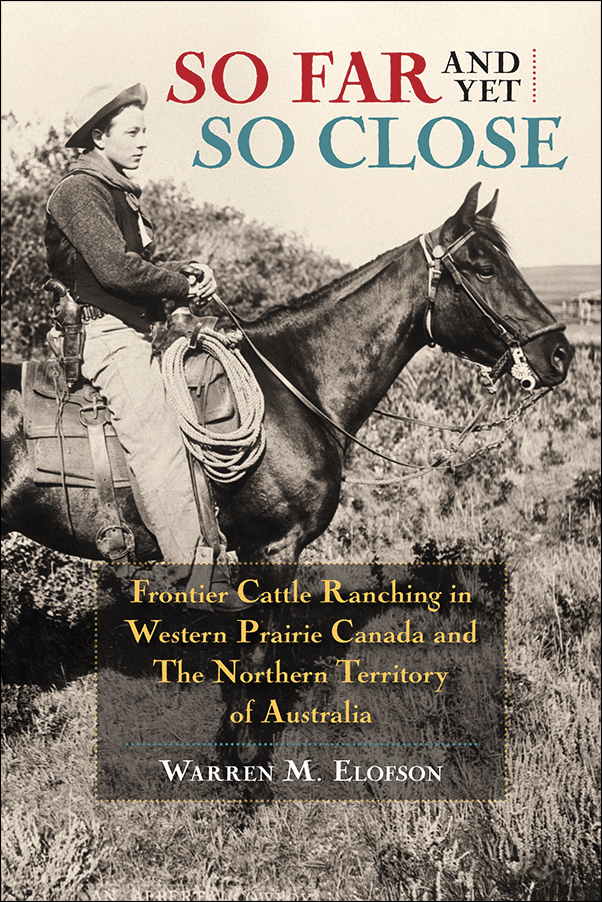 So Far and Yet So Close: Frontier Cattle Ranching in Western Prairie Canada and the Northern Territory of Australia

So Far and Yet So Close provides a comparative study of frontier cattle ranching in two societies on opposite ends of the globe. It is also an environmental history that at the same time centers on both the natural and frontier environments.

There are many points at which the western Canadian and northern Australian cattle frontiers evoke comparisons. Most obviously they came to life at about the same time: late 1870s-early 1880s. In both cases, corporations were heavy investors and utilized an open range system in which tens of thousands of cattle roamed over thousands of square acres. Ranchers shared similar problems such as predators, disease, and weather, as well as markets. Ultimately, a nearly indistinguishable “country” culture developed in these geographically disparate and distant lands, which is still apparent today.

Many similarities were in one way or another a reflection of frontier environmental conditions that is, conditions associated with the very “newness” of society. They included a lack of infrastructure (ie. fences), institutions (ie. police), and population (ie. consumers). However, the ranching people in these two societies had their differences too. In the end, the natural environment pushed agricultural development in these two regions along very different paths.

Warren Elofson is a professor, and former head, of the history department at the University of Calgary, where he has taught since 1986. He has written several books on British and western Canadian history, including Somebody Else’s Money: The Walrond Ranch Story, 1883-1907 (2009) and Frontier Cattle Ranching in the Land and Times of Charlie Russell (2004). Much of Dr. Elofson’s expertise in western Canadian agriculture comes from many years of personal experience ranching and farming in Alberta.

Praise for So Far and Yet So Close

In addition to being an environmental history, So Far and yet So Close: is also an engrossing social history… makes an important statement about how the rough-and-tumble crew culture of the frontier was tempered by a growing institutional framework for family-based farms, even though the frontier ranch culture persists in distinctive regional customs and social traditions.

Warren M. Elofson’s So Far and Yet So Close provides an interesting comparative history of two seemingly disparate corners of the globe . . . Elofson provides a persuasive argument.

Elofson goes beyond discussions of the environment to produce a social history of these regions, including his description of the rough and raucous “crew culture” that was created on the frontier by the gender imbalance of having two single young men to every woman. Compelling, too, are his accounts of the unique women who lived on the frontier — those who worked, hunted, fished, and ran ranches as part of pioneer households.

An interesting and useful comparative study.