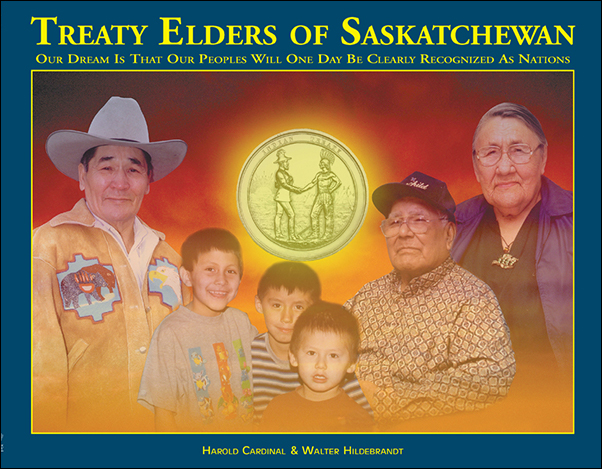 Treaty Elders of Saskatchewan: Our Dream Is That Our Peoples Will One Day Be Clearly Recognized as Nations

By Harold Cardinal and Walter Hildebrandt

Treaty Elders of Saskatchewan brings together the voices of many Saskatchewan elders to provide a truly Indigenous perspective on treaties and treaty rights.

The result of a number of Treaty Elders forums, this is a readable and highly informative book that places the voices of Indigenous Elders first. The comments recorded here provide a wealth of context and understanding for wide-ranging topics ranging from conceptions of the land, living together, scared promises to one another, and evolving interpretations of Treaty Rights. This book is essential reading for all those who wish a full understanding of the complex issues that surround Treaties in Saskatchewan, and in Canada.

It is my hope, and the hope of the Office of the Treaty Commissioner, that this publication can help provide the historical context needed to intelligently and respectfully forge new relations between First Nations people and non-Aboriginal people in the province of Saskatchewan. It has already done so, in part, by facilitating the work of our office in bringing together the parties of the Federation of Saskatchewan Indian Nations and Canada to reach common understandings and to use the Treaties as a bridge from the past to the future … so that we can learn from the past and work together towards a future built on co-operation and mutual respect.

We say it’s our Father; the White man says “our Father” in his language, so from there we should understand that he becomes our brother and we have to live harmoniously with him. There should not be any conflict, we must uphold the word witaskewin, which means to live in peace and harmony with one another.

Harold Cardinal is author of The Unjust Society: The Tragedy of Canadas Indians.

Walter Hildebrandt is a poet and historian and co-author of The True Spirit and Original Intent of Treaty 7.

Praise for Treaty Elders of Saskatchewan

This book is a very important contribution to available literature on the treaties because it is one of the few titles that brings a truly Indigenous perspective and voice to the topic.