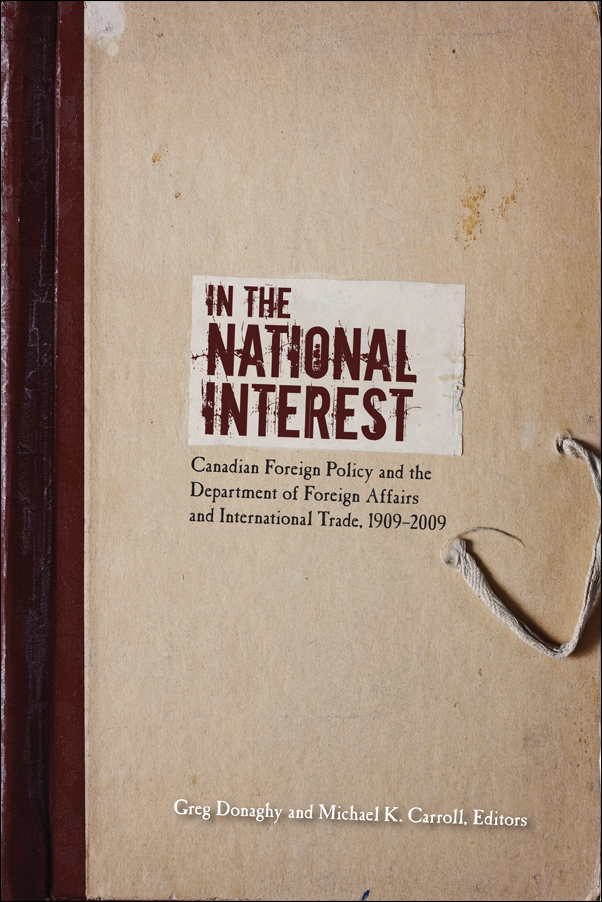 In the National Interest: Canadian Foreign Policy and the Department of Foreign Affairs and International Trade, 1909-2009

Accomplished analysists and rising stars explore the evolution of Canada’s role as a world power and sense of itself within the global landscape in this engaging and provocative collection.

Canada’s role as world power and its sense of itself in the global landscape has been largely shaped and defined over the past 100 years by the changing policies and personalities in the Department of Foreign Affairs and International Trade (DFAIT).

This engaging and provocative book brings together fifteen of the country’s leading historians and political scientists to discuss a century of Canada’s national interests and DFAIT’s role in defining and pursuing them. Accomplished and influential analysts such as Jack Granatstein, Norman Hillmer, and Nelson Michaud, are joined by rising stars like Whitney Lackenbauer, Adam Chapnick, and Tammy Nemeth in commenting on the history and future implications of Canada’s foreign policy.

In the National Interest gives fresh insight into the Canada First concept in the 1920s, the North American security issues in the 1930s, Canada’s vision for the United Nations, early security warnings in the Arctic, the rise of the international francophone community, conflicting continental visions over energy, and Canada/U.S. policy discussions.

The impact of politicians and senior bureaucrats such as O.D. Skelton, Lester B. Pearson, Marcel Cadieux, Jules Leger, Pierre Trudeau and Brian Mulroney are set against issues such as national defence, popular opinion, human rights, and energy production. In the National Interest also provides a platform for discussion about Canada’s future role on the international stage.

With its unique combination of administrative and policy history, In the National Interest is in a field of its own.

Greg Donaghy is Head of the Historical Section at the Department of Foreign Affairs and International Trade, and General Editor of its series, Documents on Canadian External Relations. His publications include Tolerant Allies: Canada and the United States, 1963-68, and the edited collection (with Patricia Roy) Contradictory Impulses: Canada and Japan in the 20th Century.

Michael K. Carroll is an assistant professor of History at Grant MacEwan University. He is also the author of Pearsons Peacekeepers: Canada and the United Nations Emergency Force, 1956-1967.

Praise for In the National Interest

An excellent collection . . . highly recommended to both specialists and general readers alike.