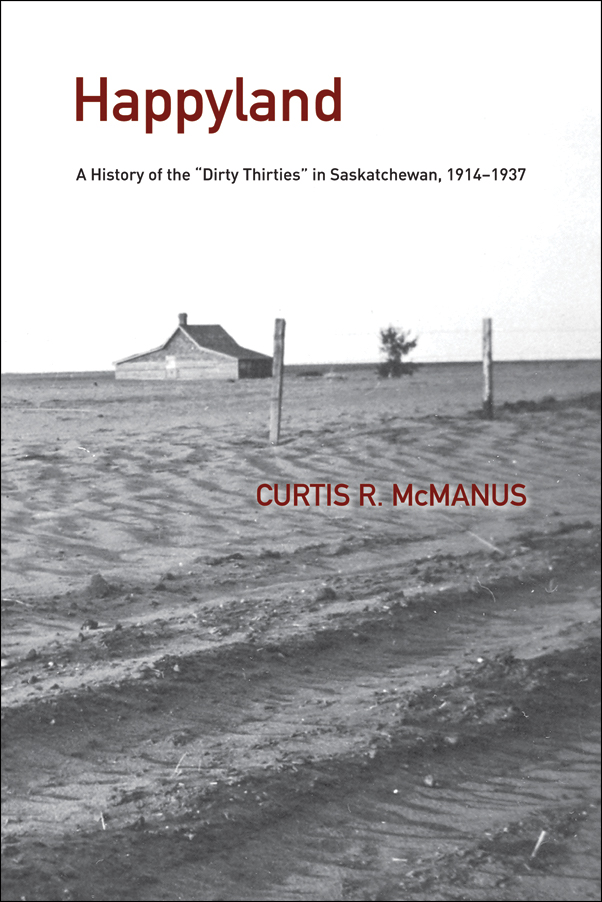 Living, breathing prose and sound scholarship are intertwined in this account of the agricultural crises commonly known as the “dirty thirties,” a quarter-century of absurdity, despair, dislocation, and stubborn persistence.

The “Dirty Thirties” is the sobriquet commonly applied to the agricultural crisis in the drylands of southern Saskatchewan in Canada that coincided with the Great Depression, and it is generally assumed that prior to this period healthier, normal conditions prevailed.

In Happyland, Curtis McManus contends that the “Dirty Thirties” actually began much earlier and were connected only peripherally to the Depression itself. McManus has mined the rarely consulted records of Rural Municipalities in Saskatchewan, as well as government documents, ministerial correspondence, local community histories, newspapers, and publications of relevant government departments, to tell a story of a quarter-century of stubborn persistence but also of absurdity, despair, social dislocation, moral corrosion, and inconsistent and often inept government policy.

Thanks to McManuss rare and welcome blend of sound scholarship and living breathing prose, it is a gripping and evocative story as well.

Curtis McManus is a writer and historian. He teaches history at Lakeland College in Lloydminster, Alberta.

Happyland is written with verve and confidence. McManus is deeply engaged with the subject and his enthusiasm is contagious . . . Happyland tells a story that needs to be told, a great human tragedy that we have not yet fully fathomed.

Happyland is a joy to read.

McManus makes effective use of the records of ten (of the ninety) rural municipalities in this region, as well as local newspapers and community history books, to document the economic, social, and psychological consequences of the recurring droughts