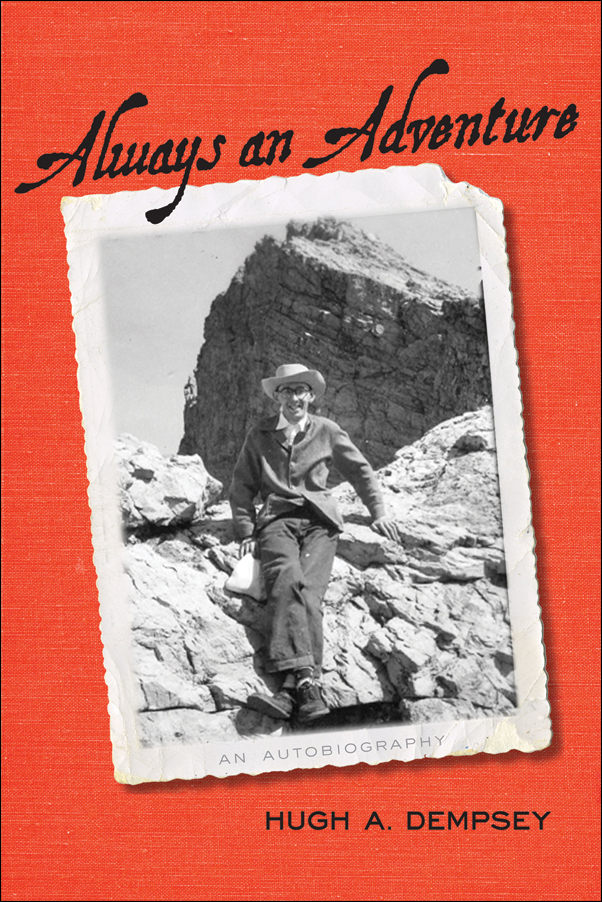 Always an Adventure: An Autobiography

Once of Alberta’s most prominent and influential public historians reflects on Alberta’s cultural growth, history, and his own eventful life in this fascinating memoir.

Hugh Dempsey has for decades been one of Alberta’s most prolific and influential public historians. Author of more than twenty books, he has also been “in on the ground floor” of the development of many key Alberta institutions, including the Indian Association of Alberta, the Historical Society of Alberta, and most importantly, the Glenbow Museum. Now, in his own words, he recounts his interesting and varied careers as journalist, government publicity writer, popular historian, archivist and museum administrator, speaker, and lecturer.

Beginning with a compelling account of his childhood in Edmonton in the 1930s—when his family was for a time on relief during the Depression—and his 1940s teenage escapades hitchhiking across the continent, Dempsey’s narrative moves into the frenetic world of post-war urban journalism. A fateful chance assignment as a reporter for the Edmonton Bulletin in February 1950 led to his involvement with the fledgling Indian Association of Alberta, its secretary John Laurie, president James Gladstone, and Gladstone’s daughter Pauline, whom Dempsey would eventually marry. This in turn led to a strong interest in Indigenous culture and biography through which Dempsey was able to combine oral history with scholarly records to produce historical writing with a broad popular appeal.

During the 1950s, Dempsey helped design early provincial historical recognition programs and began his lifelong involvement with the Historical Society of Alberta. In 1956 he joined the Glenbow Foundation (later Glenbow Museum), where for the next thirty-five years he would play a crucial part in its growth and reputation for excellence, designing and managing the Glenbow Archives and eventually serving as Acting Director of the Museum before retiring in 1991.

Written with the trademark Hugh Dempsey eye for detail and lively anecdote, this memoir will be essential and enjoyable reading for anyone interested in Western and Indigenous history and the growth of key Alberta cultural institutions.

Hugh Dempsey is Chief Curator Emeritus of the Glenbow Museum in Calgary and one of western Canada’s most respected historical authors. His books include The Amazing Death of Calf Shirt and Other Blackfoot Stories, and The Golden Age of the Canadian Cowboy. Dempsey was made an honorary chief of the Kainai Blackfoot in 1967 and in 1975 was invested as a member of the Order of Canada.

Praise for Always an Adventure:

No-one lives for hundreds of years, yet the memoirs of Hugh Dempsey read like the recollections of a man who has observed history for centuries . . . This historian who married into the history of the West provides an unparalleled perspective on the Canadian experience

A forthright account of the life of one of Canada’s most eminent public historians.

Engaging, readable . . . Dempsey has a genuine gift for storytelling.

An upbeat and life-affirming story.