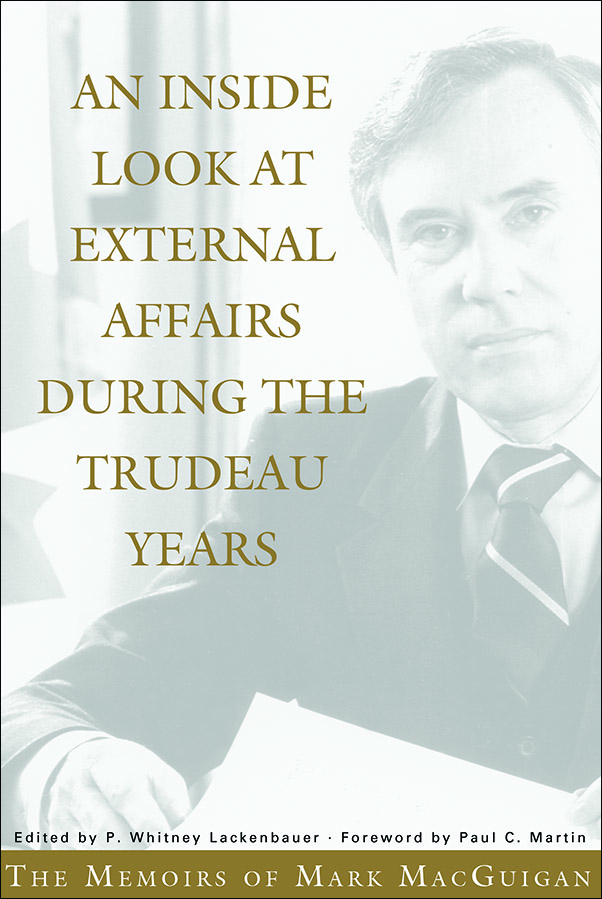 An Inside Look at External Affairs During the Trudeau Years: The Memoirs of Mark MacGuigan

By Mark MacGuigan, Edited by Whitney Lackenbauer, With a Foreword by Paul Martin

The Memoirs of Mark MacGuian, Secretary of State for External Affairs, Minister of Justice, and Attorney General of Canada.

Between these covers, you will read about the life of an individual—Mark MacGuigan—who dedicated his life to bettering Canada. From his fascination with the law to his interest in politics and international affairs, Mark made a lasting impact on virtually every area to which he turned his efforts . . . from the forward by Paul Martin

Mark MacGuigan was appointed Canada’s Secretary of State for External Affairs in a tumultuous period of renewed East-West tensions, challenging Canadian-American relations, and regional conflict in the early 1980s.

In this perceptive mélange of autobiography and study of foreign policy under Pierre Elliott Trudeau, MacGuigan surveys a wide range of bilateral and multilateral issues, weaves together an intriguing cast of national and international characters, and offers important insights into the making of foreign policy from a ministerial perspective.

In chronicling the events in which he participated, MacGuigan describes his motivations, reactions, and decisions which illuminate Trudeau’s approach to foreign policy and governance. An Inside Look at External Affairs during the Trudeau Years reflects on the interplay between domestic and international agendas and individual personalities in caucus that ultimately shape foreign policy.

Hon. Justice Mark MacGuigan (1931-1998) was a professor of law at the University of Toronto, Osgoode Law School, and dean of the Faculty of Law at the University of Windsor prior to his career in federal politics. During the last Trudeau government in the 1980s, he served as Secretary of State for External Affairs, Minister of Justice, and Attorney General of Canada.

P. Whitney Lackenbauer is an associate professor in the department of history at St. Jerome’s University, Waterloo.

"It was not the best of times" MacGuigan says by way of retrospect of his two and a half years in office. His memoirs will help illuminate the dying embers of the post-1945 world