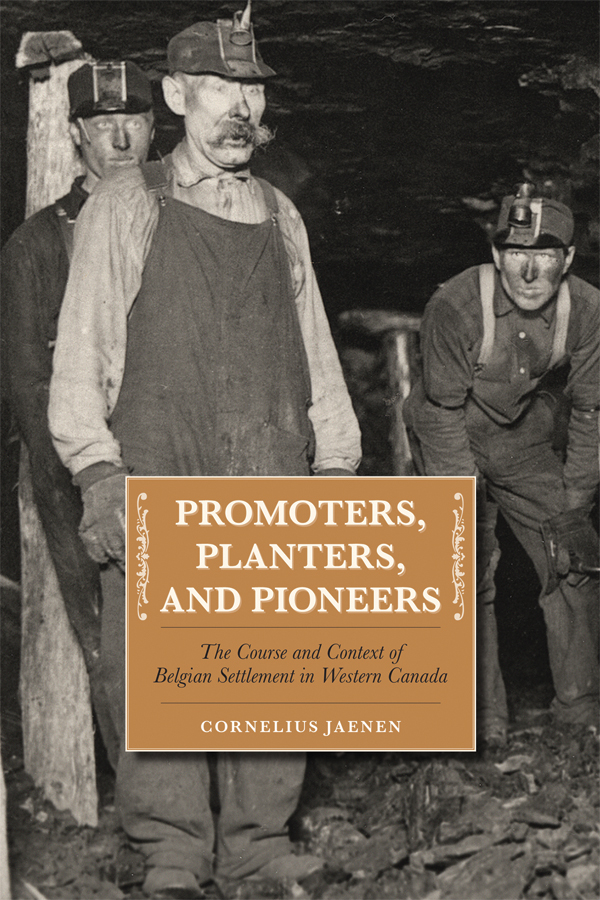 Promoters, Planters, and Pioneers: The Course and Context of Belgian Settlement in Western Canada

The story of Belgian settlement in Western Canada from the 1880s onward, exploring the unique character of Belgian immigration and immigrants through detailed scholarship.

In this comprehensive study of Belgian settlement in western Canada, Cornelius Jaenen shows that Belgian immigration was unique in its character and brought with it significant benefits out of proportion to its comparatively small numbers. Canadas first Immigration Act (1869) included Belgium among the “preferred countries” from which immigrants should be sought, but unlike many other European countries, Belgium did not encourage its nationals to emigrate to relieve economic, demographic, and social crises, and Belgian officials took a strong interest in their emigrants, monitoring the conditions of settlement and, where fraud was discovered, intervening diplomatically and paying for repatriation. The result was a resourceful body of settlers adaptable to both anglophone and francophone communities and adept at promotion and raising of capital.

The first wave of immigration, beginning in the 1880s, consisted mainly of farmers to southern Manitoba and miners to Vancouver Island. A second wave after 1896, facilitated by a direct steamship link to Antwerp, brought more miners, as well as orchard planters to the Okanagan, sugar beet farmers to Alberta, and dairymen to Manitoba. World War I was followed by a further wave of agriculturally oriented settlement, and World War II by a mainly urban and skill-oriented cohort. In all cases, Belgians differed from the larger immigrant groups in that they were not recruited by important immigration societies and did not settle in ethnic blocs.

There is probably no one better equipped than Cornelius Jaenen to write the history of the Belgians in western Canada. An eminent historian and the son of Flemish and Walloon Belgian immigrants himself, Professor Jaenen has gleaned, from Belgian and Canadian archival sources and from local, community, and family histories, a story rich in detail and context that will be invaluable to Canadians of Belgian origin as well as scholars and students of western Canadian ethnic and immigration studies.

Cornelius J. Jaenen is emeritus professor in the Department of History at the University of Ottawa. He has written extensively on Canadian ethnic and religious history and on the history of New France.

Priase for Promoters, Planters, and Pioneers

This is a book of an insider/outsider and it comes with the strengths of that combinatiom . . . not simply a formulaic and hagiographical history. Promoters, Planters, and Pioneers has plenty of flesh and blood in it, replete with believable sympathetic characters and many interesting, quaint, and even humorous, anecdotes.

A comprehensive history of Belgian immigration in Canada by a leader in the field of ethnic studies, Jaenen’s book also provides a close look at immigration processes and the settlement of the Canadian West. It will be a welcome addition to the bookshelf of anyone interested in settlement and immigration history.