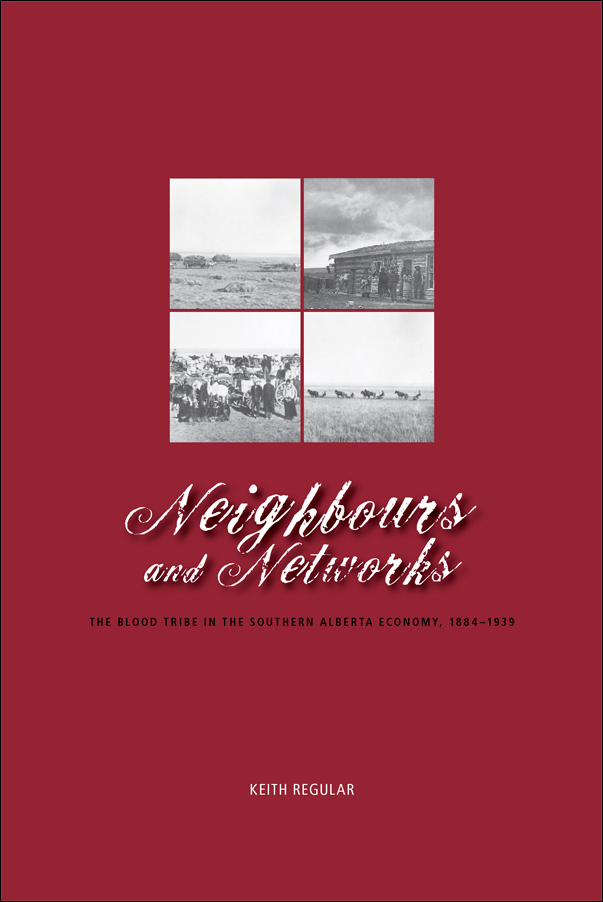 Neighbours and Networks: The Blood Tribe in the Southern Alberta Economy, 1884-1939

Neighbours and Networks explores the economic relationship that existed between the Blood Tribe and settler-colonial inhabitants of Southern Alberta between 1884 and 1939.

The Blood Tribe, though living on a reserve, refused to be economically isolated. Instead, they became significant within the Southern Alberta economy. Their land was important to the ranching industry. Their products, especially coal and hay, were sought after. They were expert freighters and skilled labourers, crucial to the effective function of industry. Blood Tribe ties to the merchant economy, especially in Cardston and Fort Macleod, provided significant support for the settler-colonial communities.

This economic growth and success was built on the successful interactions of Indigenous and settler-colonial people, systems, and cultures. In Neighbourhoods and Networks Keith Regular fills the gap left by a Canadian historiography that largely ignores the economic associations between Indigenous and non-Indigenous people. He refutes the perception that Indigenous communities have played only a minor role in regional development, instead showing the development of a cross-cultural, cooperative, and mutually beneficial economic relationship in the post-Treaty period on the Canadian plains.

Keith Regular teaches history and social studies at Elkford Secondary School, Elkford, British Columbia. He received a PhD in history from Memorial University of Newfoundland in 1999.

Priase for Neighbours and Networks: