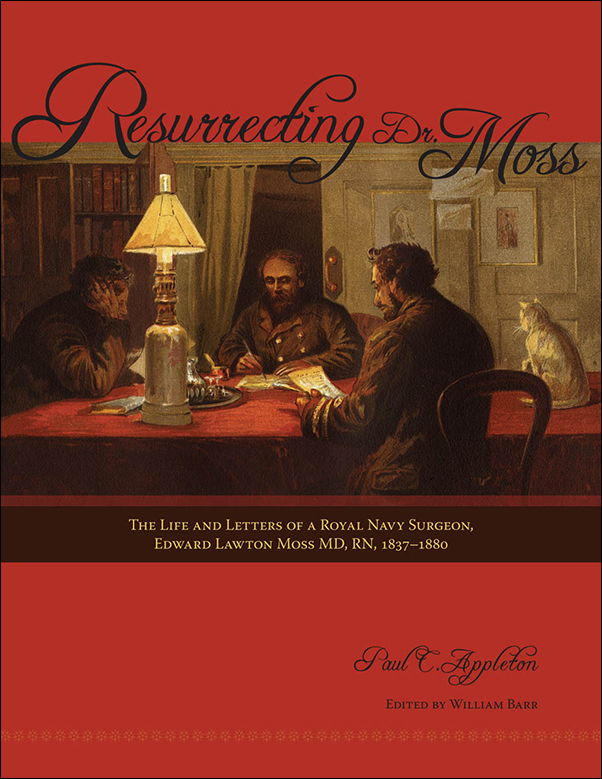 Arctic historians and bibliophiles are familiar with Moss’s account of the 1875-76 British Arctic Expedition, published under the title Shores of the Polar Sea, but little has been known about Moss himself. Now, thanks to Paul Appleton’s painstaking research, his life has taken shape in this well-crafted biography.

Relying heavily on Moss’s own letters, Appleton recounts his travels in the Caribbean, the Arctic, and on Canada’s Pacific coast, creating a vivid portrait of a man he calls “an example of the best traditions of British naval medicine during the Victorian era.”

Artist, author, explorer, and scientist, Dr. Moss was also a pioneering medical officer. During his posting in British Columbia, he played a pivotal role in founding one of the earliest medical institutions on Canada’s west coast, the hospital at the Esquimalt Naval Base. Moss’s life was cut short at the age of thirty-seven when the HMS Atalanta disappeared en route from Bermuda in 1880.

Paul Appleton, a history teacher, earned his undergraduate and graduate degrees at the University of Calgary and pursued doctoral studies at Queen’s University. He published articles about Dr. Moss in BC Historical News, The Westcoaster, and Archaeology magazine. Paul Appleton died in March 2006.

William Barr is a research fellow at the Arctic Institute of North America. A glacial geomorphologist by training, his major research focus is the history of exploration in the Arctic, a subject on which he has published extensively. In May 2006, he received a lifetime achievement award from the Canadian Historical Association for his contributions to the historiography of the Canadian North.

Attractively produced . . . This book can be recommended, not just for describing the Nares Expedition and the life of Dr Moss. While every naval surgeon’s career was unique, the context in which their careers developed was the same. The Royal Navy was a major force in polar exploration, both north and south, and many of the medical officers who served on these expeditions have also been highly talented and this book will help to describe the context of their careers as well.