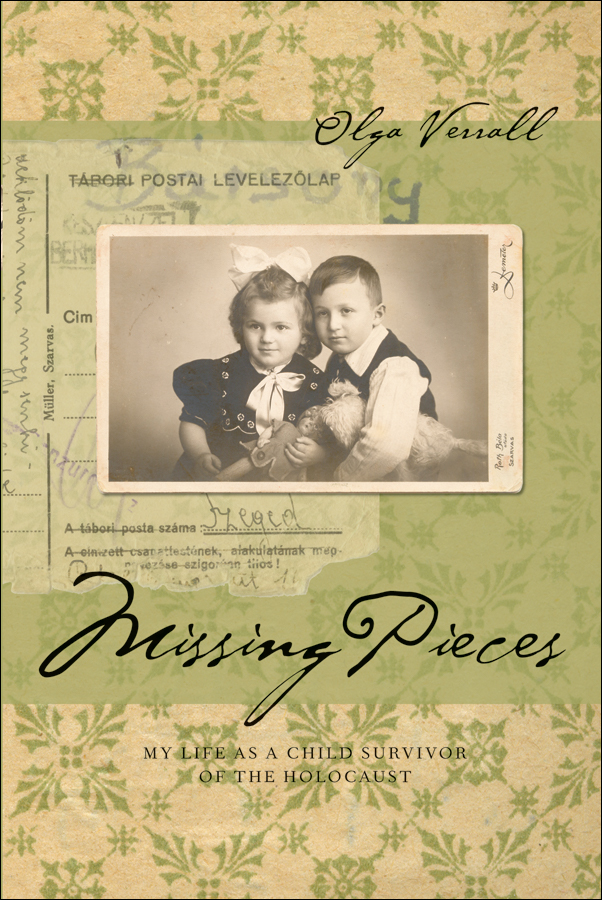 Missing Pieces: My Life as a Child Survivor of the Holocaust

Olga Barsony Verrall tells her story of survival, from the destruction of her idyllic childhood by the Nazi invasion of 1944 through labour camps and Communist oppression, through immigration to Canada and addiction, emptiness and anger in a memoir of tragedy, healing, and hope.

Until age seven, Olga Barsony Verrall lived an idyllic life in Szarvas, a small town in Hungary, surrounded by her doting, observant Jewish family. After the Nazi invasion in 1944, Olga found herself, along with most of her family, interned in the Auspitz (Hustopece) labour camp. Eventually reunited after the war, the family returned to Szarvas, only to face a different kind of oppression at the hands of the new Communist government.

After immigrating to Winnipeg in 1957, Olga met and married Orland Verrall, the cantor at Rosh Pina synagogue. Together they built a new life in Canada and soon welcomed two daughters, Judy and Lesley. Yet Olga continued to be haunted by her past. Though she was very young during her time in the camp, Olga had vivid and painful memories of the horrifying things she had seen and experienced there. A nagging sense of emptiness and anger stayed with her all her life. After her beloved husband Orland passed away, her emotional state became increasingly fragile, and she became dependent on prescription drugs to numb her pain.

A long journey of physical and mental healing, along with the support of her family, helped Olga piece her life back together. For Olga, writing her memoir was a catharsis. For her readers, it will be an inspiration.

Olga Verrall was born in Szarvas, Hungary in 1936. She immigrated to Winnipeg and married in 1957. She has two daughters and two grandsons and currently lives in Toronto.

Her story adds to the growing literature related to individual life stories of Holocaust survivors. There is much we can learn from her book.