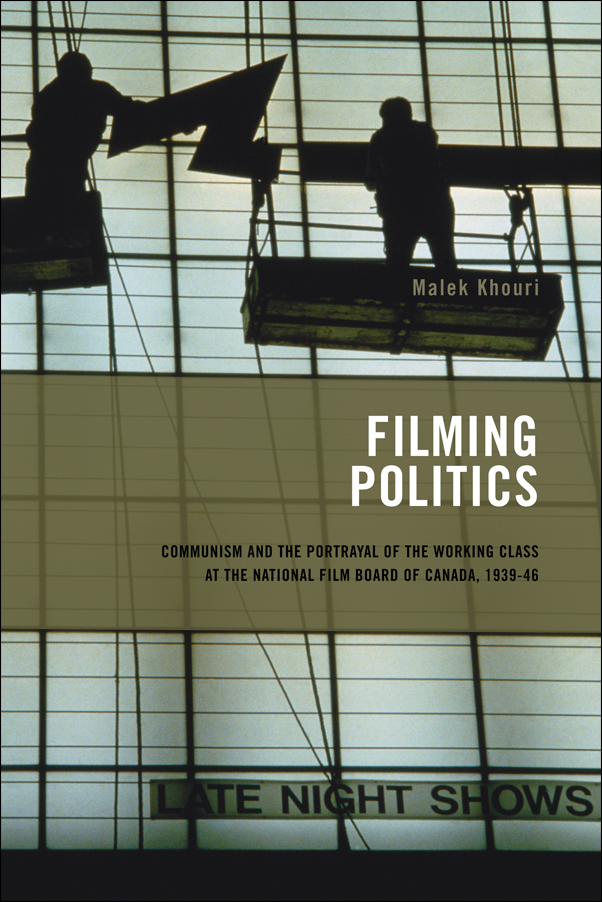 Filming Politics: Communism and the Portrayal of the Working Class at the National Film Board of Canada, 1939-46

More than simply promoting Canadian cinema, the films created and distributed by the National Film Board of Canada reflected the turbulent political and social climate of the early 20th century, from struggles for social progress to the war against fascism and the rise of the Soviet Union.

The National Film Board of Canada (NFB) was created in 1939 to produce, distribute, and promote Canadian cinema both domestically and abroad. During the early years of the NFB, its creative output was largely informed by the turbulent political and social climate the world was facing. World War II, Communism, unemployment, the role of labour unions, and working conditions were all subjects featured by the NFB during the period from 1939 to 1946.

In Filming Politics, author Malek Khouri explores the work of the NFB during this period and argues that the political discourse of the films produced by this institution offered a counter-hegemonic portrayal of working-class people and presented them as agents of social change. These films also saw an organic link between Canadian struggles for social progress, in the war against fascism and for peace, and those promoted at the time by the Soviet Union. Khouri also analyzes the various social, institutional, and political elements that contributed to the formation of the NFB’s discourse.

Filming Politics brings to light a number of films from the early years of the NFB, most of which have long been forgotten. Khouri presents a thorough reading of these films and the historical context within which they were produced and viewed. As such he proposes a radically new outlook on the films from how they have been appropriated in previous studies on Canadian cinema.

Malek Khouri is associate professor and director of the Film Program at the American University in Cairo. He is co-editor of Working on Screen: Representations of the Working Class in Canadian Cinema and author of The Arab National Project in Youssef Chahine’s Cinema.