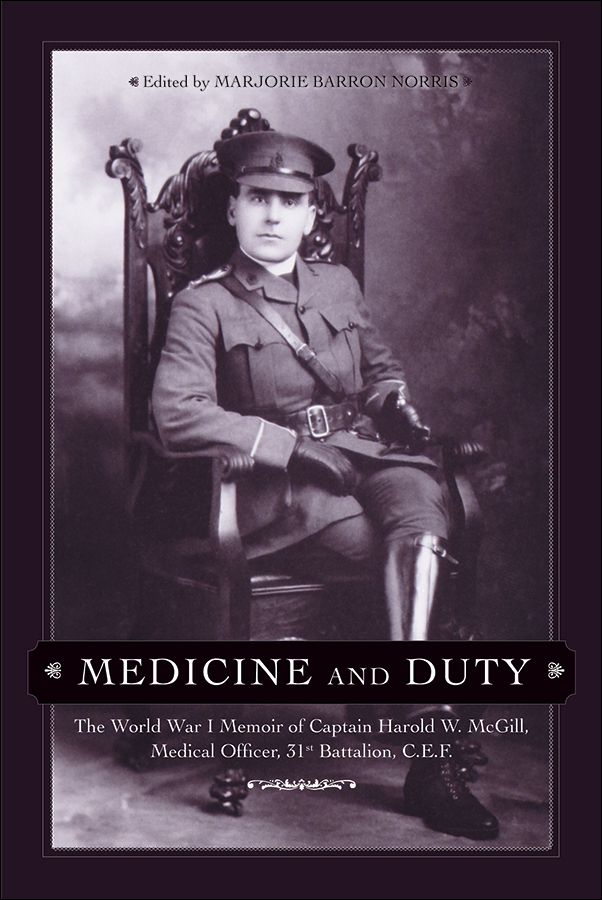 Edited by Marjorie Barron Norris, With a Foreword By Patrick Brennan

Medicine and Duty is the World War I memoir of Harold McGill, a medical officer in the 31st (Alberta) Battalion, Canadian Expeditionary Force, edited and presented by writer and historian Marjorie Barron Norris

McGill attempted to have his memoir published by Macmillan of Canada in 1935, but, unfortunately, due to financial constraints, the company was not able to complete the publication. Decades later, editor Marjorie Norris came upon a draft of the manuscript in the Glenbow Archives and took it upon herself to resurrect McGill’s story.

Norris’s painstaking archival research and careful editing skills have brought back to light a gripping first-hand account of the 31st Battalion and, on a larger scale, of Canada’s participation in World War I. A wealth of additional information, including extensive notes and excerpts from letters written “from the trenches,” lends a new sense of immediacy and realism to the original memoir and provides a fascinating, harrowing glimpse into the day-to-day life of Canadian soldiers during the Great War.

Marjorie Barron Norris is a writer and historian who lives in Calgary. She has previously written about the history of nursing in World War I and on the history of the Calgary Local Council of Women.

Praise for Medicine and Duty

The story of the individual always grips us—it is why biography remains so popular. But in Medicine and Duty we receive a double serving: the story of Medical Officer Captain Harold W. McGill coupled with the story of the many men who served in the 31st Battalion and what they together managed to achieve against such long odds.