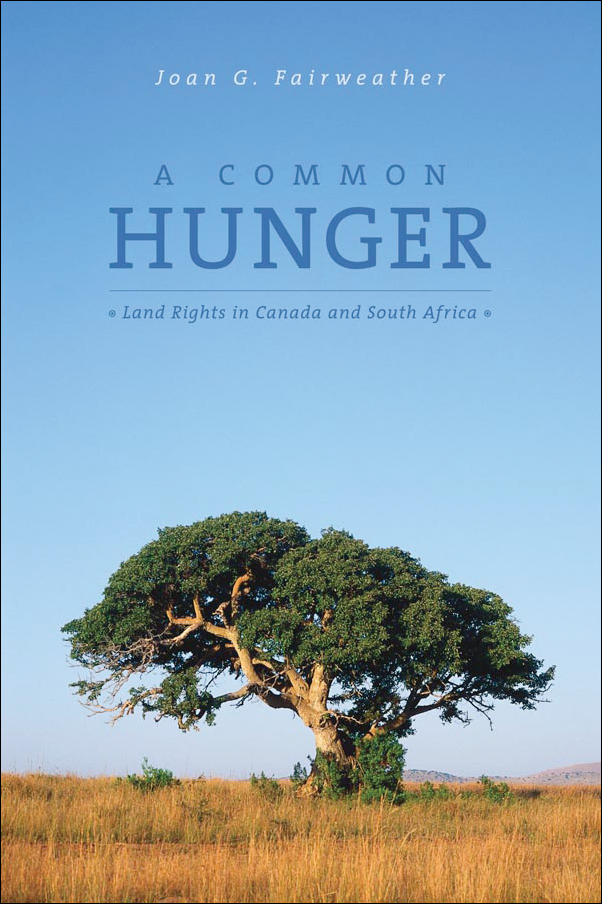 A Common Hunger: Land Rights in Canada and South Africa

A balanced examination of land claim processes that brings historical context to ongoing discussions of the effects of land dispossession and efforts to ensure that justice is done.

Geographically, demographically, and politically, South Africa and Canada are two countries that are very far apart. What they have in common are Indigenous populations, which, because of their historical and ongoing experience of colonization and dispossession, share a hunger for land and human dignity.

Based on extensive research carried out in both countries, A Common Hunger is a comparative work on the history of Indigenous land rights in Canada and post-apartheid South Africa. Joan Fairweather has constructed a balanced examination of the impact of land dispossession on the lives of indigenous peoples in both countries and their response to centuries of European domination.

By reclaiming rights to the land and an equitable share in the wealth-producing resources they contain, the first peoples of Canada and South Africa are taking important steps to confront the legacies of poverty that characterize many of their communities. A Common Hunger provides historical context to the current land claim process in these two former British colonies and examines the efforts of governments and the courts to ensure that justice is done.

Joan G. Fairweather is a South African historian, archivist and writer living in Ottawa. After many years as a sound and film archivist at Library and Archives Canada, she worked at the Open Society Archives in Budapest and more recently in South Africa at the Mayibuye Centre for History and Culture in South Africa, now part of the Robben Island Museum in Cape Town.

Praise for A Common Hunger:

This interesting and well-documented book attempts the difficult task of comparing the histories of European occupation and subsequent dispossession, oppression, and struggles for liberation of indigenous/Aboriginal peoples in Canada and South Africa

The strength of Fairweather’s book is its well-written narrative account of the injustices and hardship suffered by indigenous peoples in Canada and Black South Africa and her sympathetic but shrewd assessment of their prospects of recovery from this experience.