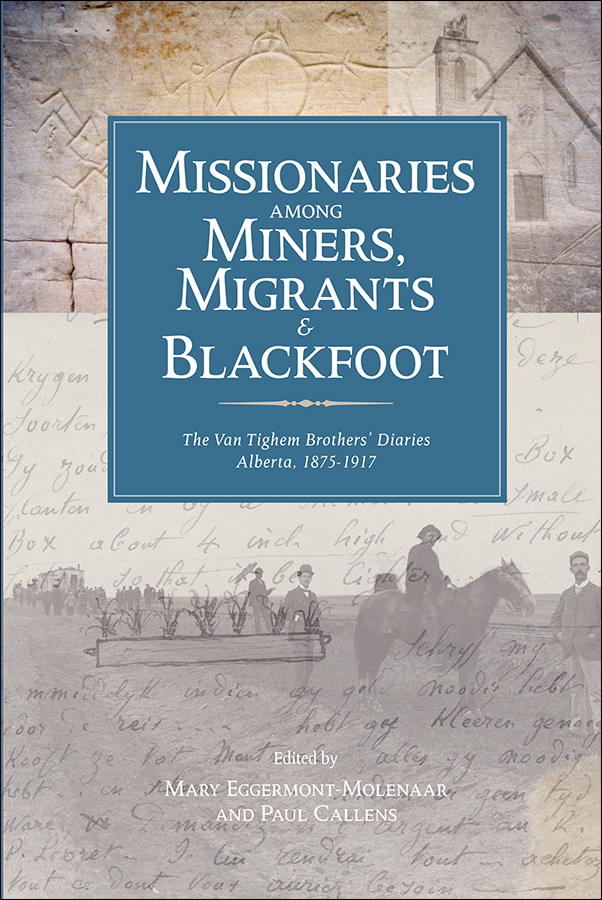 Using valuable primary source material, most of which is previously unpublished, and some of which has been translated from the Flemish-Dutch and French, editors Mary Eggermont-Molenaar and Paul Callens introduce the Van Tighem brothers to today’s reader.

Missionaries Among Miners, Migrants, and Blackfoot contains the transcribed diaries of brothers Leonard and Victor Van Tighem, Belgian Catholic missionaries in Alberta between 1874 and 1917. Leonard, an Oblate priest, served in a number of parishes in southern Alberta, some of which he helped establish. Victor, a member of the Belgian Van Dale congregation, served on the Peigan and Blood reserves, in the southern part of the province. Their diaries are interspersed with letters from family and friends and letters and articles by contemporary bishops and fellow priests and lay-brothers.

The Van Tighems’ diaries offer a fascinating glimpse of life during Alberta’s early settlement and growth—the immigration boom, the development of Lethbridge and the Peigan reserve, railroads, the mining industry, and the impact of World War I are all part of the historical backdrop of the brothers’ diaries.

Mary Eggermont-Molenaar was born in the Netherlands. She received a BA in social work and an MA in law and taught health law. She immigrated to Canada in 1986 and currently works as a freelance writer, editor, and translator.

Paul Callens, who is related to the Van Tighem family, lives in Belgium and is employed as a structural engineer. For many years, he has been active in the Flemish Genealogical Society and has been researching and compiling information on Belgian emigration to America.