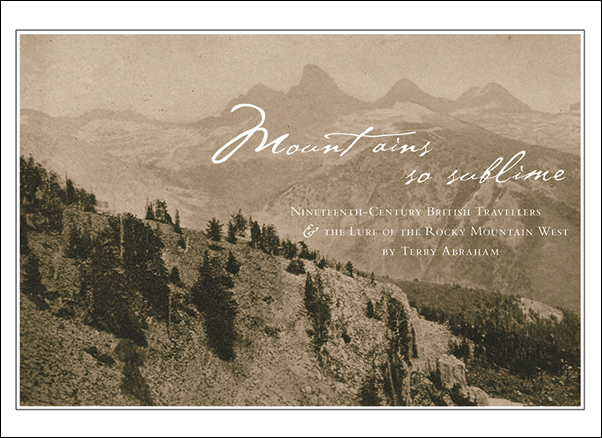 Mountains So Sublime: Nineteenth-Century British Travellers and the Lure of the Rocky Mountain West

A thoughtful study of the reactions of British Victorian travellers to the Rocky Mountains and the Canadian West, providing not only fascinating insight into the minds of the Victorians but surprising parallels with the environmental concerns of today.

“Picturesque,” “immense,” “fantastic,” and “sublime” are a few of the ways early British travellers described the landscape of the Rocky Mountains and the surrounding terrain. As part of a long tradition of British travellers’ tales, these tourists—explorers, sportsmen, writers, scientists, artists, missionaries, and merchants—sought ways to describe the vastness and strangeness of the North American landscape to a British audience.

Using their published and unpublished accounts as source material, Mountains So Sublime weaves their observations, their aesthetic, and their ‘Britishness’ into a unique view of a nearly vanished West. Attempting to make their West real to their readers, these travellers encouraged the growing realization that North American scenery was a unique aspect of the world’s natural heritage. Many travellers also sought to convey the changes brought by an onrushing progress.

The British were among those who cautioned against excessive human encroachment on the landscape, demonstrating what might be called “environmental pre-awareness.” Today’s readers will discover perhaps surprising parallels between modern environmental and conservation issues and the concerns expressed by these early travellers.

Terry Abraham, a native of Oregon, has lived in Idaho since 1970. In 2005, he retired after twenty-one years as Head of Special Collections and Archives at the University of Idaho.

Praise for Mountains So Sublime

Mountains So Sublime is a thoughtful study of the reactions of Victorian British travellers to the Rocky Mountain West . . . engagingly written, well illustrated, and an interesting and enjoyable read.

Because of its exquisite design, heavy paper, and beautiful illustrations, simply handling this book [provides] far more pleasure than the usual academic text . . . Mountains So Sublime is an enjoyable introduction to an engaging body of texts that have much to tell us and that deserve to be better known.

Mountains So Sublime is a beautifully designed book . . . The range of primary sources collected in this attractive book suggest Abraham’s talent as an archivist.