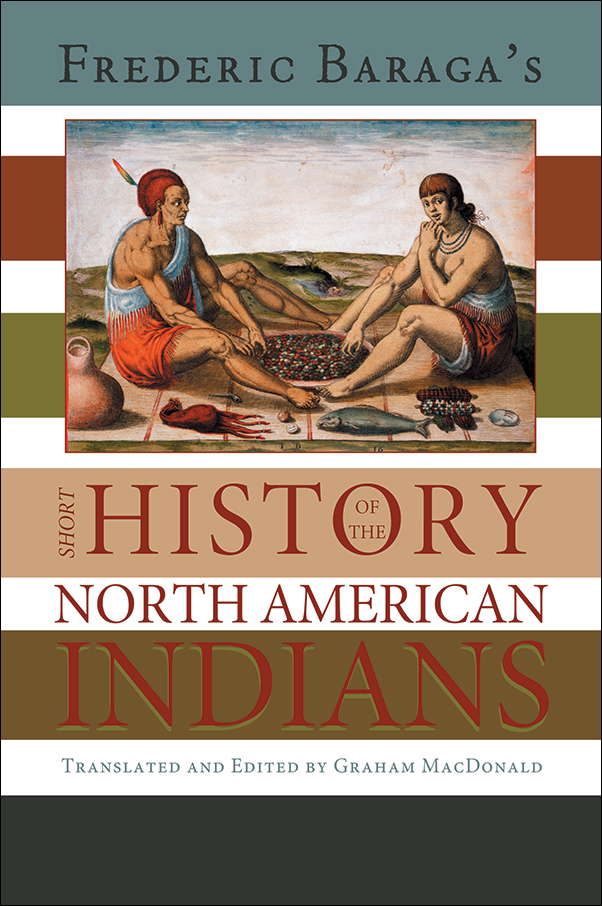 Edited and Translated by Graham A. MacDonald

Originally published in 1837 in Europe in German, French, and Slovenian editions, and appearing here in English for the first time, Frederic Baraga’s Short History of the North American Indians is the personal, first-hand account of a Catholic missionary to the Great Lakes area of North America.

When Frederic Baraga (1797 – 1868), a young Roman Catholic Priest from Slovenia, arrived on the upper Great Lakes frontier in 1831, his objective was to bring Christianity to the Native peoples of that quarter, particularly those of the Ottawa and Ojibwa (Chippewa) tribes. His travels to many outposts of the old fur trade, to Native communities, and to the new mining camps of the region, became legendary, earning for him the nickname “the snowshoe priest.”

Frederic Baraga’s Short History of the North America Indians is the account of his first years in Michigan Territory. It was composed for the enlightenment of his supporters in Europe, particularly the membership of his sponsoring agency, the Leopoldine Society of Vienna. This detailed account sheds light on the nature of mid-nineteenth century Catholic missions to the New World and includes observations of Native communities on the Lake Superior frontier, including hunting techniques, tools, and cultural features of these tribes.

About the Editor and Translator

Graham MacDonald has worked as a historian, teacher, librarian, and park planner. He is the author of A Good Solid Comfortable Establishment: An Illustrated History of Lower Fort Garry, and Where the Mountains Meet the Prairies: A History of Waterton Country