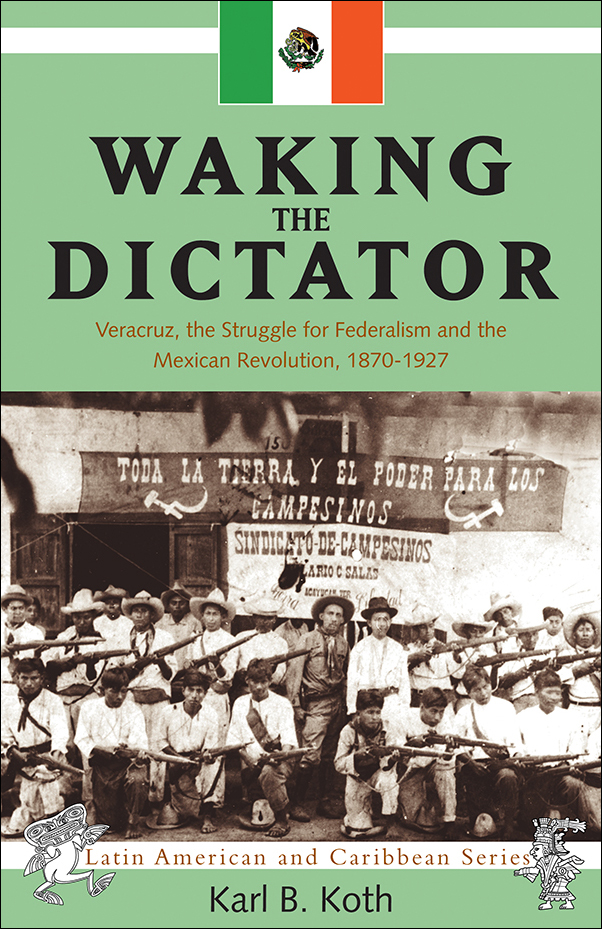 Waking the Dictator: Veracruz, the Struggle for Federalism and the Mexican Revolution, 1870-1927

Waking the Dictator is a study of federalism in late-nineteenth-century Veracruz State. It is also a politico-military analysis and an evaluation of social-revolutionary relations in the epoch of the Porfiriato and the Mexican Revolution.

Karl B. Koth interprets the Mexican Revolution across two axes: one is the heightened struggle for federalism, i.e., the conflict between the state of Veracruz and the central government; and the other is the class struggle that was brought into sharp relief by the violent social and military upheaval. Koth illustrates why and how, in 1927, President Plutarco El’as Calles crushed federalism, suppressed the aspirations of working classes, and co-opted a re-emergent Veracruz bourgeoisie.

In Koth’s view, the initial promises of the Mexican Revolution were never fulfilled. The old rancor born of elite control and the loss of federalism still brews not far beneath the surface of contemporary Mexican politics. This study is the first modern, comprehensive, and analytical history of the Porfiriato and Mexican Revolution in Veracruz.

Karl B. Koth, a researcher of Mexican history for over twenty years, has published extensively in the field. His travels and scholarly research have taken him throughout the Caribbean, Latin America, and North America. He has taught history in Jamaica, Mexico, and Canada. He teaches in the history department at the University of Manitoba.

Priase for Waking the Dictator

Koth’s study is the first political and military history to trace the centralist-federalist struggle from the mid-nineteenth century through the Mexican Revolution in Veracruz . . . It should be placed alongside other well-known regional histories of the revolutionary era concerned with the centralist-federalist paradigm, the struggle for local autonomy, and peasant/worker rebellions fighting for social justice.

Koth shows clearly that revolutionary impulses relating particularly to land but also to labour and industrialization, were present well before the Revolution broke out in 1910. He explains the political currents at the elite level that were beginning to cause fissures in President Diaz’s control which would establish opportunities for resistance.

Koth’s study represents a skillful telling of the political, economic, and social history of Porfirian and Revolutionary Veracruz State. His extensive research and significant discoveries in previously untapped archives underscore the importance of regional studies in the history of nineteenth- and twentieth-century Mexico. The struggles in Veracruz illustrate Mexico’s chronic conflicts between centralism and federalism. This book contributes to the ongoing debate over the nature and scope of the Mexican Revolution.

—Christon I. Archer, University of Calgary